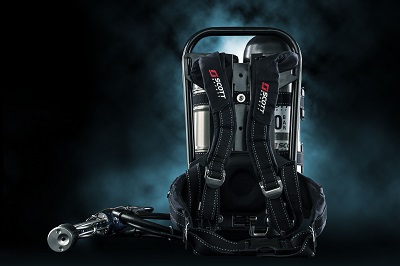 A new portable airborne and surface decontamination solution from Scott Safety is achieving a fire industry first – decontamination of chemical, biological and radiological vapours, liquids and particles simultaneously in as little as five minutes.

"It’s lightweight, portable yet extremely powerful. In validation trials, the system decontaminated anthrax by 99.9999999% from a 100m³ space, in less than five minutes."

When exposed to CBRN (the release of chemical, biological, radiological or nuclear materials), prompt decontamination of fire fighters and their equipment following hazardous materials incidents, is paramount. Exposure can happen in a multitude of situations, from a call out to investigate accidental releases of hazardous materials at industrial locations, to flood defence, motorway fuel spillages and even terrorist activity. As the industry also learns more about the long-term effects of firefighter exposure to carcinogens and the link to occupational cancer, decontamination at the incident scene is more important than ever.

With the rising cost of Personal Protective Equipment (PPE), providing back-up gear for every firefighter in a brigade is a significant investment. LDS provides brigades with a cost-effective solution to fully decontaminate the vehicle, equipment and the firefighters themselves (with use of respiratory protection), enabling teams to return to the station in uncontaminated suits.

The Light Decontamination System utilises new Scott Safety atomisation technology to create a fine mist to ensure even and consistent coverage and haptic dry surfaces. Rapidly projecting these droplets in the form of a dense and turbulent mist, the system is capable of delivering CBRN decontaminants to all non-line of sight surfaces. This process drastically reduces both the chemical footprint and time required for effective decontamination. Unlike many traditional decontamination systems which utilise liquids, this new process forces powders to behave like a gas, ensuring that sensitive and electronic equipment is not damaged.

Environmentally friendly and cost-efficient, Light Decontamination System typically requires only five percent of decontaminant compared to traditional systems due to the gas-like behaviour of the small droplet mist. Easily directed and controlled with a lance hose, the system achieves a projection distance of up to 30 meters and is compatible with a range of chemistries.