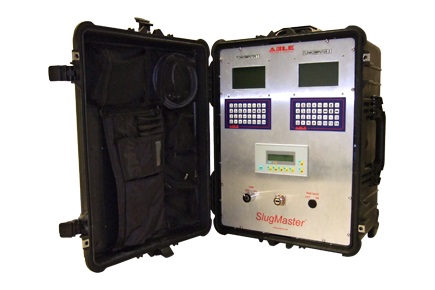 ABLE’s cutting-edge SlugMaster Intelligent Ultrasonic Flow Metering System has been granted a patent by the US Patent and Trademark Office. The SlugMaster is a product of ABLE’s innovative Research and Development Division, specialists in ultrasonic metering techniques and is designed to address difficult process parameters often associated with separated crude.

The Reflexor is calibrated against the inherently more accurate Transit Time and Density Input at the point where the latter is just failing to measure. The result is a non-invasive metering system which facilitates an accuracy exceeding that which could be achieved from either technology, operating in isolation, at the transition point.

During the development stage, factory testing against a Coriolis Mass Flow Meter demonstrated accuracies of better than 3% under all test conditions and as good as 1% for the majority of the trials. This performance has been borne out by full installations, including those in the North Sea and the Kashagan Field.