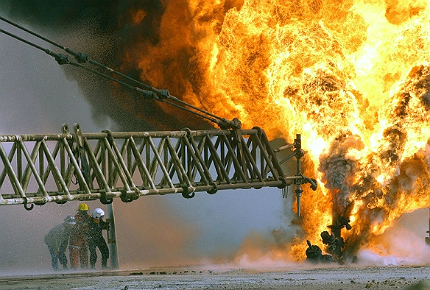 Global concern over fossil fuel reserves has been the cause of significant efforts to improve efficiency, so is the wanton waste of natural gas that occurs during flaring not counterintuitive?

That is certainly the opinion of the World Bank and the European Bank for Reconstruction and Development (EBRD), which have called upon oil companies and countries producing natural gas to reduce the practice by 30% in the next five years.

With approximately 140bn cubic metres (bcm) of natural gas flared in 2011, however, such an optimistic target may prove to be daunting.

Flaring for a cause

Such is the relatively widespread use of flaring in oil production that flare stacks and flaring equipment have become almost as instantly recognisable as oil derricks. Crude oil is, perhaps obviously, considered the more valuable asset and whereas some flaring is vital, to ensure plant equipment is not over-pressurised, the majority of gas flaring at production sites is more attributable to other, less worthy causes.

The World Bank lists some of these causes as quantities being too low for which to justify the financial expense of collection and treatment, locations being too remote for realistic transportation by pipeline, or platforms not having sufficient space for the treatment and export of collected gas.

Although these reasons may be difficult to comprehend, it is perhaps understandable that businesses would be unwilling to extract natural gas at a loss, particularly if the presence of natural gas runs the risk of endangering lucrative crude oil extraction.

As a result, the World Bank estimates that around $50bn of associated gas is flared each year.

Campaigning for a solution

In order to reach their optimistic target of a 30% reduction in flaring by 2017, the World Bank and the EBRD are channelling funds through the Global Gas Flaring Reduction (GGFR) partnership, an initiative established in 2002 to produce similar results.

"The World Bank estimates that around $50bn of associated gas is flared each year."

In the six years between 2005 and 2011, the partnership contributed towards a 20% reduction in gas flaring. To give that figure perspective, the 274 tonnes of CO2 saved by this reduction of flaring is roughly equivalent to removing 52 million cars from the road.

The GGFR partnership funds projects, aids in technology deployment and the sharing of best practices and identifies natural gas monetisation projects. Notable projects of the last decade have included facilitating a 50% reduction of gas flaring in Azerbaijan in collaboration with SOCAR and BP, as well as enforcing new local regulation in Mexico to contribute towards a 66% reduction in gas flaring at Pemex.

To tackle its latest target, the partnership is now expanding its activities to include the capture of natural gas along the entire gas value chain, while also promoting clean electrical power generation and the adoption of cooking fuels wherever possible. The largest savings have been earmarked for countries such as Russia, Kazakhstan, Azerbaijan and Turkmenistan, with further emphasis placed on the development of local infrastructures and gas markets to ensure that no area is deemed too remote to extract, treat and export natural gas.

One key example of this infrastructure development is occurring in Iraq, with a joint venture involving Iraq’s South Gas Company, Shell and Mitsubishi. Announced on 1 May 2013, Basrah Gas Company will be Iraq’s largest ever gas project and the world’s largest flares reduction initiative and will capture, rather than flare, natural gas at three oil fields in southern Iraq, namely Rumaila, West Qurna 1 and Zubair.

"The 274 tonnes of CO2 saved by this reduction of flaring is roughly equivalent to removing 52 million cars from the road."

Despite having gas reserves totalling 112.6 trillion cubic feet – the tenth largest in the world – the country’s gas infrastructure is inadequate and incapable of handling such volumes. The country’s damaged and crumbling pipelines, largely neglected due to war and international sanctions, are estimated to cost the country billions of dollars per year.

South Gas Company director general Ali Khudair said: "Basrah produces only around one billion cubic feet a day of associated gas and some 700 million cubic feet are being flared, which is wasting millions of dollars of the country’s resources ever day."

Partnering with Shell and Mitsubishi, Khudair adds, will "help Iraq fulfil its goal of developing its gas infrastructure to eliminate flaring and provide fuel to the Iraqi industry, power generation as well as income to the state."

In order to achieve this, Basrah Gas Company will rehabilitate and upgrade current facilities while also constructing new ones, with production capacity expected to increase from the current 400 million cubic feet per day to two billion cubic feet. An LNG plant is also under consideration, which will allow Iraq to export as soon as domestic energy needs are met, supporting the country’s economic growth.

Projects in Iraq provide an example for other nations to follow and adopt, with public and private interests needing to combine to form a concerted solution. While government policy and regulation can provide the framework for such measures to take place, private industry is capable of allocating the requisite resources and technology to culminate in reductions to gas flares.

Alternative solutions could be found in the implementation of penalties and incentives, both penalising excessive gas flaring and rewarding measures taken to reduce the practice wherever possible. This would, however, require an unlikely universal agreement on what constitutes fair and reasonable penalties, as well as transparency in the legal, financial and regulatory practices of the oil sector; elements which have pasts murkier than the oil extracted.

Despite the rafts of obstacles that need to be manoeuvred around, the GGFR partnership’s goal of a 30% reduction in gas flaring by 2017 is not beyond achievable.

Optimistic it may be, but the project’s successes are evidence enough to suggest that, with the correct level of investment and governmental aid, routine flaring for anything other than depressurisation could become a practice of the past.