Nearly everyone is reliant on oil in some way to get through an average day – whether it is for their car, public transport or a plane journey – yet it is thought that few are actually aware of how crude oil is recovered and the many challenges involved in the process.

To highlight the challenges and skills needed for oil extraction and to engage players from outside the industry, Danish oil giant, Maersk group, has launched ‘Quest for Oil’, a video game set on an offshore oil rig.

The first game of its kind, Quest for Oil invites each player to drill the depth of the seabed off Qatar and in the North Sea, seeking oil.

To complete the challenge, first the player must test their analytical skills by looking for oil on a seismic map, just as oil and gas companies would do.

The player is then tested on how precisely they position the high-tech drilling equipment, while keeping an eye on temperature and pressure, before starting to extract and produce the oil.

Providing a glimpse into the industry 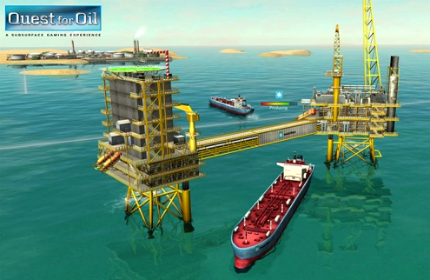 Maersk hopes the free downloadable game will educate people about the oil industry in a fun and interactive way, while demonstrating the challenges of working on a drilling rig, with its 53,000 tonnes of steel rammed into the bottom of the ocean.

"The first game of its kind, Quest for Oil invites each player to drill the depth of the seabed off Qatar and in the North Sea."

"Most people take for granted that we have oil and natural gas and not many people understand what it takes to find and produce it," says Jakob Thomasen, CEO of Maersk Oil.

"It’s a sophisticated, fascinating industry and Quest for Oil offers everybody a glimpse of what oil and gas exploration is all about today."

Thomasen told the publication that he hopes the game will also be a tool for encouraging young people to join the industry.

"We have a very broad audience but of course we hope to attract young people to the industry," he said.

He added that students shown the game during a preview trial were enthused by it, and several approached him about careers in the industry, which they had previously not considered.

"The idea is to stimulate the interest and [make people] say, ‘Wow this is something I want to try.’"

Drilling to discover the industry’s future

This comes a week after Subsea7 HR director, Steve Harvey, declared that the shortage of specialist skills in the oil and gas industry is "genuinely worrying" and that the situation had now reached "tipping point."

This is a problem that is expected to become more exacerbated in the next couple of years, as a large proportion of the industry’s highly skilled and experienced workers hit retirement age.

According to an Oil and Gas People survey, to fill these shoes there needs to be a mass recruitment drive.

They say that 120,000 staff during the next ten years will need to be requited to bridge the gap.

"According to an Oil and Gas People survey, to fill these shoes there needs to be a mass recruitment drive."

Although Quest for Oil wasn’t designed solely for recruitment purposes, anything that brings the industry to young people’s minds can only be a positive.

Although how riveting they will find it compared to commercial games is up for discussion.

Quest for Oil can be downloaded at questforoil.com.

It’s worth bearing in mind that though it may seem challenging to a novice at first, even Thomasen himself has admitted to loosing the game.

Gas flaring, the burning off of natural gas, has been identified as a parlous waste of limited fuel reserves that could be worth billions of dollars to local gas markets.