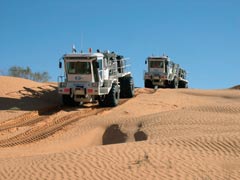 Geoscience firm CGG has secured a contract from Saudi Aramco to undertake a high-density land seismic programme in Saudi Arabia.

The three-year contract was secured by ARGAS, CGG’s joint venture with TAQA in Saudi Arabia. The deal is anticipated to commence in the fourth quarter and has an option for two extension periods of one year each.

Under the deal, CGG’s equipment division, Sercel, will supply the entire seismic equipment deployed on the survey programme.

CGG said that the data will be acquired using a 50,000-channel mega-crew operating with the Sercel 428XL acquisition system, Sercel SG-10 geophones and a fleet of 24 Sercel Nomad 65 Neo vibrators. CGG’s broadband UltraSeis technology portfolio will be deployed to acquire the high-resolution data.

CGG CEO Jean-Georges Malcor said that the programme marks an important milestone in the company’s 2014 to 2016 strategic plan to benefit from the expansion of ultra-high-channel-count surveys in the Middle East region.

"We are delighted that Saudi Aramco is continuing its long-term relationship with CGG by awarding what is one of the world’s largest land seismic survey programmes to our ARGAS joint venture with TAQA," he said.

Image: The land seismic programme is anticipated to commence in the fourth quarter of the year. Photo: courtesy of CGG.