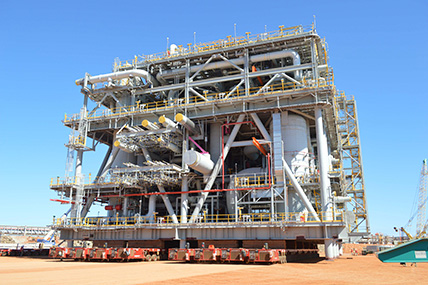 Chevron Australia has unveiled the arrival of the final train 1 module for the Gorgon Project on Barrow Island, off Western Australia’s Pilbara coast.

The module weighs around 6,300t. Its arrival completes the delivery of 21 modules needed for the project’s first natural gas processing train.

Chevron Australia managing director Roy Krzywosinski said that the arrival of the final train 1 module marks a key milestone in the development of the largest single resource development in Australia’s history.

"This milestone is the culmination of an incredible effort by many people committed to safely delivering the Gorgon Project," Krzywosinski added.

The milestone follows the recent landing of the first carbon dioxide compressor and domestic gas modules.

The domestic gas module will condition and increase the natural gas pressure to a suitable level. It will then be transported via the project’s 90km pipeline from Barrow Island to the mainland.

Chevron Australia leads the development of the Gorgon and Wheatstone natural gas projects and also manages its one-sixth interest in the North West Shelf Venture. The company has been operating Australia’s largest onshore oilfield on Barrow Island for over 45 years.

Image: The final train 1 module for the Gorgon Project is now on Barrow Island. Photo: courtesy of Chevron Corporation.