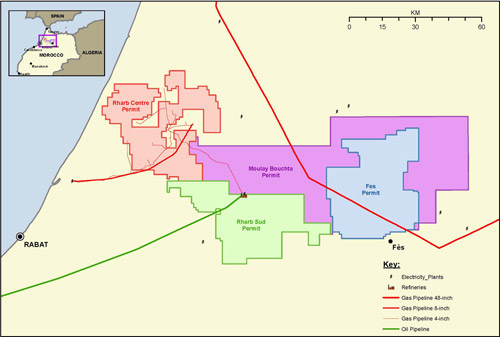 ONHYM will retain a 25% participating interest and Gulfsands will carry all the costs for the exploration phase of the permit. The Moulay Bouchta permit is adjacent to Gulfsands’ existing permits, Fes and Rharb Sud.

The permit spans 2,850km² and represents the remaining prospective acreage in the area, where the existence of a working petroleum system has been confirmed with the discovery and development of three oil fields.

Oil was produced from shallow reservoirs, to a depth of around 1,200m. Gulfsands aims to explore the potential of deeper and potentially larger structures.

Gulfsands said a portion of the permit area has already been the subject of a 175km² 3D seismic survey and the data together with legacy 2D seismic data over other portions of the licence area will be supplemented by regional seismic data previously acquired by the company. Apart from the reprocessing and interpretation of legacy 2D and 3D seismic data, a further 500km of 2D seismic data is expected to be captured in a survey to be conducted during the first two year exploration period.

Gulfsands will also carry out a legacy oil field reactivation study during the first exploration period, as part of a minimum exploration work programme, which is anticipated to cost approximately $3.5m.

Image: The Moulay Bouchta permit covers an area of about 2,850km² and is located to the north of Gulfsands’ Rharb Sud permit. Photo: courtesy of Gulfsands Petroleum Plc.