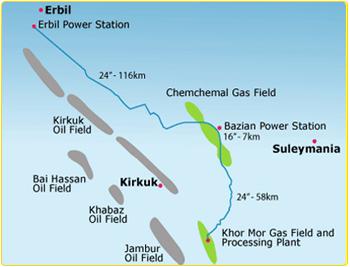 Sharjah-based Dana Gas has restarted full production at its Khor Mor plant in the Kurdistan region of Iraq after repairing a gas pipeline between power stations.

In January 2016, a rupture at a gas pipeline between the Chemchemal and Erbil power stations had interrupted supply from the Khor Mor plant.

The Khor Mor plant, which is now back to production, is again supplying gas at full capacity to these two power stations.

Following the pipeline explosion, a large fire is believed to have occurred.

"An investigation is being carried out to determine the cause of the explosion."

An investigation is being carried out to determine the cause of the explosion.

Sulaimani’s Electricity Directorate responded to the incident and said in a statement that the blast would impact power supply to the region, NRT reported.

The pipeline supplies gas to Erbil from the Shwan district near Kirkuk. The gas is used to generate around half the electricity in Kurdistan.