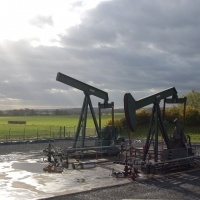 The company reported positive results from the second Penistone Flags flow test at licence PEDL180 located to the east of Scunthorpe.

Zone 3a in the Penistone Flags was perforated over a 7.5m interval and produced good quality oil with a gravity of 33o API.

"The latest test has confirmed the presence of an oil column below the gas zone in the Penistone Flags, albeit in tighter sandstones."

The Wressle-1 well has to date flowed oil and gas from three separate reservoirs, the Ashover Grit, the Wingfield Flags and the Penistone Flags.

Egdon Resources managing director Mark Abbott said: "The results from Wressle continue to be very positive.  The latest test has confirmed the presence of an oil column below the gas zone in the Penistone Flags, albeit in tighter sandstones.

"To date the well has successfully flowed hydrocarbons from four discrete intervals, with the Penistone Flags delivering a facilities restricted gas flowrate of 1.7 mmcfd, plus an aggregate 89 bopd; free-flowing rates of up to 182 bopd and 0.46 mmcfd from the Wingfield Flags and 80 bopd from the Ashover Grit."

The company plans to carry out pumped extended well test (EWT) to validate the optimised production potential that is expected to be secured from the Wressle discovery.

The EWT is expected to start in mid-May 2015 and continue for about two months.

Image: A total of 98.5 barrels of oil were recovered during the second Penistone Flags flow test at the Wressle-1. Photo: Courtesy of Egdon Resources.