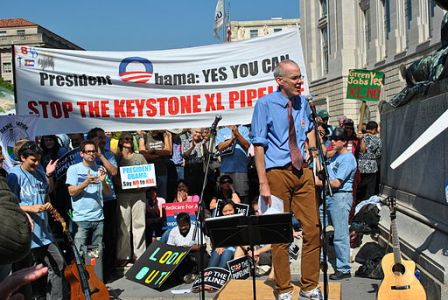 On Monday the US environment regulatory, the Environmental Protection Agency (EPA), criticised the State Department’s environmental impact review of the Keystone XL pipeline, which will carry Canadian tar sands oil from Alberta to Nebraska.

The EPA has asked the State Department to re-evaluate whether rail shipments will be the best alternative to the pipeline, as diluted bitumen or dilbit can be more dangerous to transport through pipeline and could be more harmful than conventional crude if it spills.

Pointing out similar concerns, leading environmental groups have also announced that the Obama administration’s most recent environmental review on the Keystone XL pipeline has violated the nation’s core environmental law.

The environmental groups include Sierra Club, National Wildlife Federation, Natural Resources Defense Council, Friends of the Earth and nine others.

The groups have said that Canadian tar sands crude would be carried to market by rail or some other safe means if the pipeline were blocked.

In their 200-page comment, the groups said the State Department had allowed itself "to avoid a full assessment of the project’s direct, indirect and cumulative impacts, including its climate impacts," as required under the National Environmental Protection Act (NEPA).

The State Department said it will evaluate the project’s direct, indirect and cumulative impacts, which also includes climate impacts, as required under NEPA.

The groups have also demanded pipeline company TransCanada produce detailed emergency response plans for any oil spill that may occur.

The EPA also said that the pipeline may emit a billion tonnes of carbon dioxide, which will cause major environmental pollution.

Image: Environmental groups have said that Canadian tar sands crude will be carried to market by rail or some other safe means, if the pipeline were blocked. Photo: Courtesy of chesapeakeclimate.