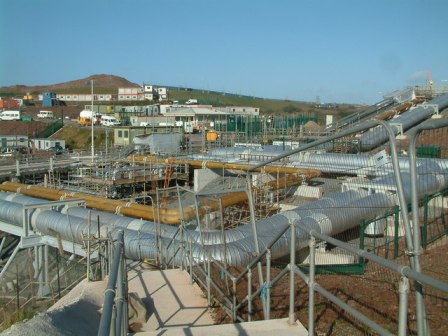 Under the agreement, the companies will transport 15.6 million tonnes of LNG each year to the South Hook terminal in Wales from the Golden Pass plant in Texas, US, reported Reuters.

In the UK, natural gas stocks dropped to low levels during a long winter, leading to hike in prices and demand for a better supply system.

Britain, which has many LNG import terminals, has not signed any long term supply deals, which makes it susceptible to sudden shortages, as shippers from the Middle East can divert cargoes to higher paying markets in Asia during the winter.

Durinig the colder months, The South Hook terminal was underused despite higher demand.

The Golden Pass plant was built in 2010 to import LNG, but it has remained idle for three years.

Golden Pass LNG Terminal and Golden Pass Pipeline are developing a LPG receiving terminal located near Sabine Pass, Texas, and an associated pipeline connecting to the existing US pipeline infrastructure.

Image: Exxon Mobil and Qatar Petroleum will transport 15.6 million tonnes of LNG each year to Britain, from Golden Pass plant in Texas, US. Photo: Courtesy of Robin Lucas.