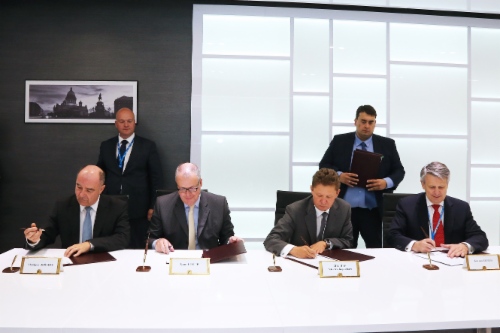 The alliance indicates the parties’ intention to implement a project, which will involve construction of two gas pipeline strings connecting the Russian coast with the German coast via the Baltic Sea.

"The alliance indicates the parties’ intention to implement a project, which will involve construction of two gas pipeline strings connecting the Russian coast with the German coast via the Baltic Sea."

The proposed pipeline is expected to enable transmission of 55 billion m³ of gas every year.

The allies are planning to draw on the experience and best practices of Nord Stream, which was obtained by Gazprom in 2012.

Gazprom Management Committee chairman Alexey Miller said: "Upon commissioning of the Nord Stream gas pipeline, Gazprom has been looking into the possibility of boosting the capacity of this route.

"Extra gas transmission facilities along the shortest route connecting gas fields in Russia’s north to European markets will provide for higher security and reliability of supplies under new contracts."

E.ON Management Board member Klaus Schäfer said: "With this project we plan to continue and expand our successful partnership with Gazprom.

"The experience gained in Nord Stream has demonstrated that transportation of gas through the Baltic Sea is a reliable solution for the EU energy needs from the economic, technical and environmental points of view."

"That’s why such new projects are important to satisfy the demand for energy carriers, especially with an account of the declining domestic gas production in Europe."

OMV Executive Board member Manfred Leitner said: "It is an important step towards higher security of gas supplies to Central Europe, and it will enhance the role of Baumgarten in Austria as a gas hub."