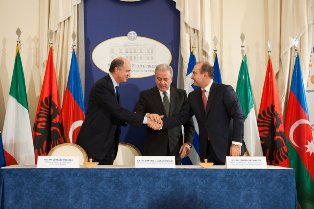 Greece, Italy and Albania have signed a tri-lateral intergovernmental agreement (IGA) with the aim of providing full support for the Trans Adriatic Pipeline (TAP) project.

TAP managing director Kjetil Tungland said the agreement will build a strong foundation and long-term security which is required to move the project forward towards selection and construction.

TAP external affairs director Michael Hoffmann said the agreement will strengthen the host governments’ support for the project from legal and regulatory point of view.

"For TAP, this concludes the last remaining high level international political agreement, which is important for the upcoming selection process by the Shah Deniz Consortium," Hoffmann added.

The TAP pipeline project has been developed to carry gas from Shah Deniz to Europe and will be the only pipeline option that will cross through Greece.

Shah Deniz Consortium is expected to make the final selection of the Southern Gas Corridor project to transport Shah Deniz gas, by June 2013.

The Trans Adriatic Pipeline is anticipated to bring significant foreign direct investment, as well as create jobs associated with the construction of pipeline in the three countries.

The pipeline will carry natural gas from the Caspian region to Europe.

Image: Greece, Italy and Albania have signed an agreement to support development, construction and operation of the TAP pipeline.Photo: Courtesy of TAP.