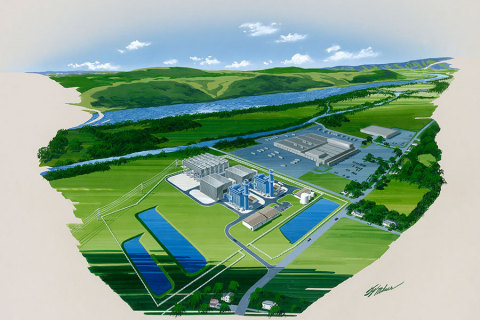 Located on an 85-acre site in Montgomery, the combined-cycle Patriot generating station is expected to be fully operational in mid-2016.

The power plant is expected to contribute an estimated $5.85bn to the local economy within the first ten years of operation.

The Panda Patriot project is located in the Marcellus Shale, expected to be the second-largest natural gas field in the world with about 330 trillion cubic feet of recoverable gas.

Pennsylvania Governor Tom Corbett said: "This is another project that shows how our ‘all of the above and below’ energy strategy is putting Pennsylvania at the forefront of the American energy revolution.

"By responsibly harvesting our abundant energy resources, we are creating family-sustaining jobs and are reinvigorating local communities all over Pennsylvania."

"By responsibly harvesting our abundant energy resources, we are creating family-sustaining jobs and are reinvigorating local communities all over Pennsylvania."

The Patriot project, which was originally developed by Moxie Energy, will be built by Gemma Power Systems, via a joint-venture (JV) with Lane Construction.

Upon completion, the natural gas-fuelled generating station will power up to one million homes in Pennsylvania.

The facility is expected to create a new long-term market for local gas producers and royalty owners.