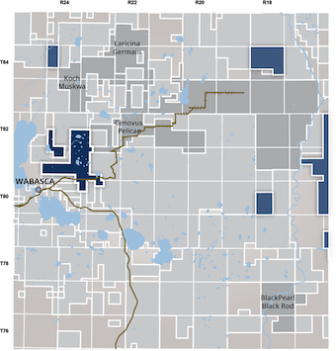 Cavalier Energy has confirmed oil reserves at the Grand Rapids formation in its 100% owned in-situ oil sands leases in the Hoole area of Alberta, Canada, through independent evaluation.

The evaluation showed that Grand Rapids formation has 93 million barrels of probable reserves with a net present value of about $379m to Cavalier’s preliminary 10,000 barrel per day in-situ SAGD oil sands development, which covers about two sections of the Hoole Lands.

The formation also includes 719 million barrels of economic contingent resources with a net current value of $1.949bn to the remaining about 54 sections of Cavalier’s Hoole Lands.

Cavalier president and CEO, William Roach, said that new evaluation proves that Hoole Lands are an important asset for Cavalier.

Cavalier has invested about $50m since 2004 through land acquisitions, stratigraphic drilling, engineering studies and environmental field programmes to develop the asset.

Located 10km northeast of Wabasca-Desmarais, Alberta, the entire project sits within the Municipal District of Opportunity.

All the updated estimates and reclassification of Hoole Project volumes, including economic contingent resources to probable reserves have been undertaken following Cavalier’s November 2012 regulatory applications to the Energy Resources Conservation Board and Alberta Environment and Sustainable Resource Development.