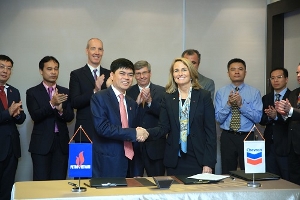 PetroVietnam Group has started construction of a VND5.6 trillion ($260m) oil and gas terminal on Phu Quoc Island off the Vietnam’s southern coast.

The development will include oil storage tanks and is intended to serve gas fields in the blocks B, 48/95 and 52/97, which are located 120km southwest of Phu Quoc.

The state owned oil and gas firm had purchased interests in the blocks from US based Chevron as a part of its upstream asset acquisition deal earlier in the month.

Block B gas project is the main oil and gas project for the company, according to Petrovietnam members’ council chairman Nguyen Xuan Son.

According to estimates, the blocks have a reserve of 170 billion cubic meters (bcm) of gas with recoverable gas reserves of 107 bcm.

Reuters cited the firm as saying that its subsidiary PetroVietNam Technical Services will invest VND4.2tn ($193m) for the first phase development of the port. The construction for the first phase has been scheduled to be completed in the second quarter of 2017.

The non-bonded storage tanks, to be set up at the site, are expected to have a capacity of 70,000m3 of oil products. PetroVietnam Oil will pay for their construction.

The planned terminal is expected to handle vessels of up to 80,000 tonnes in its first phase.

PetroVietnam Oil CEO Doan Van Nhuom was quoted by Reuters as saying that storage space at the terminal will be leased to both foreign and domestic oil firms in order to support oil product exports to third countries.

Image: PetroVietnam Group had acquired stakes in the gas blocks from Chevron earlier this month. Photo: courtesy of Vietnam Oil and Gas Group.