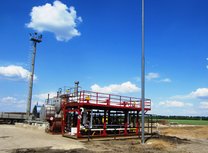 Serinus Energy has discovered gas in six zones at the Makeevskoye-22 (M-22) exploration well in Ukraine.

Two of the zones appear to be net pay, with the remaining four having resource potential, according to the company.

KUB-Gas is now preparing to complete, test and tie-in the M-22 well, which is situated on the south-west side of the major fault that runs via the Makeevskoye and Olgovskoye licences.

Serinus Energy expects to tie the well in a few weeks, once testing completes in early February, as various flowlines were pre-built in late 2014, prior to the drilling programme.

"KUB-Gas is now preparing to complete, test and tie-in the M-22 well."

The final tie-in will be subject to regulatory approvals from Ukrainian authorities.

The Ukrainian Government has passed an amendment to the Tax Code of Ukraine and, among other changes, permanently set the natural gas royalty rate at 55% for production at a depth of 5,000m, or shallower, while wells producing at depths of more than 5,000m are subject to a 28% royalty rate.

The original resolution of July 2014, which first introduced the higher royalties, also provided for a "lowering coefficient" of 55% on natural gas, which reduced the effective rate to 30.25% for the first two years of production.

Serinus Energy said the new amendment does not address the relief period, so it is unclear whether it has expired with that original legislation.

The company noted that it will seek clarification on it and other aspects of the administration of the new resolution on an expedient basis.