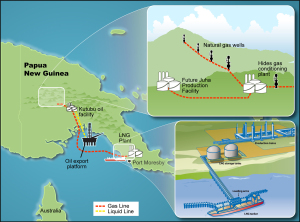 It will, however, be subject to due diligence completion by Woodside on Oil Search and execution of a confidentiality agreement between the two parties.

Oil Search is also expected to grant an agreed period of exclusivity and secure approval from its key stakeholders and shareholders for the deal to be finalised.

Woodside also intends to ensure that the transaction is approved by the PNG Government on acceptable terms.
This merger is in line with Woodside’s strategy to maximise core asset values, leverage capabilities and expand portfolio in order to deliver superior shareholder returns.

The deal is expected to drive the firm’s growth prospects since it presently has no major projects under its portfolio, which will start production by the end of the decade, reported Reuters.

Oil Search, on the other hand, has 29% stake in the PNG liquefied natural gas project, which is being operated by Exxon Mobil. It also holds equity interests in fields in the area, including the Elk and Antelope gas field which are being developed by Total.