85km north of the city of Nasiriya, Southern Iraq 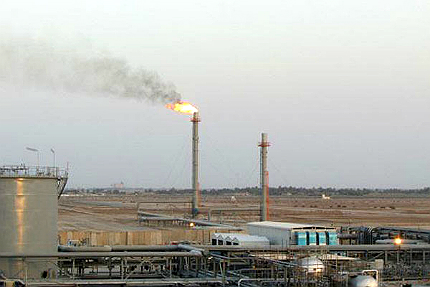 Garraf oil field is located in the province of Thi Qar, approximately five kilometres north-west of Al-Refaei city and 85km north of the city of Nasiriya. The field is owned by PETRONAS Carigali Iraq Holding (PCIHBV, 45%), Japex (30%) and North Oil Company (25%).

Development works for the oil field started in early 2011. Initial production started in August 2013. Full development is scheduled for completion in 2017.

The main contractor for the project was Weatherford International. Lakeshore TolTest is acting as a subcontractor. The front-end engineering and design study was carried out by Weatherford.

Japan Oil, Gas and Metals National Corporation (JOGMEC) provided financing to JAPEX for its participation in the project, in February 2011.

The onshore oil field was discovered in 1984 and contains oil in Cretaceous reservoirs. The field is 17.5km long and 5.5km wide. It is estimated to hold 1.3 billion barrels of oil reserves. The current production capacity of the field is 35,000 barrels of oil per day (bopd). It is expected to increase to 230,000bopd by 2017.

Development of the Garraf oil field

The Development & Production Service Contract (DPSC) was awarded to a consortium comprising of Petronas and Japex, under Iraq’s second bid round held at Baghdad in December 2009.

Drilling works commenced in March 2011. The drilling is being carried out using two rigs.

The development primarily involves the drilling of 150 wells. A total of 11 wells, including two appraisal and nine development wells, have been drilled to date.

Three of the completed wells were drilled by South Oil Company in the 1980s.

Facilities at the Garraf oil field

The construction of the initial surface facilities for production has been completed. The facilities include a degassing facility with two trains of 50,000 barrels a day each, eight storage tanks, piping, atmosphere (ATM) flares and other ancillary infrastructure.

“The oil from the GBTA will be further conveyed to Al-Fao before being pumped to the country’s southern oil export terminals.”

Other works included the construction of pumping stations, access roads and spillways, fencing, HDPE piping and installation of approximately 1,533 helical piling to support the aboveground pipeline.

More than 2,188m³ of concrete was used to lay the foundations for the steel tanks. A 15MW captive power plant will also be built at the site.

The products from the oil field are transported through a 13km pipeline to the Gharraf-Badra tie-in area (GBTA). It is conveyed to the Nassiriyah storage depot via a 92km, 28-in pipeline, constructed by Petronas, which is a continuation of the pipeline being constructed for export from the Badra Oil Field by Gazprom.

The oil from the GBTA is conveyed to Al-Fao before being pumped to the country’s southern oil export terminals.

The initial production facilities were constructed by LTC under a subcontract worth $70m awarded by Weatherford.

LTC carried out the engineering, procurement and construction (EPC) of the security walls at the oilfield, including the construction of temporary camp facilities for up to 50 people for six months.

The security walls were constructed using the company’s 60m³ per hour concrete batch plant located at the project site.

The formworks for the initial production facilities were supplied by PERI.