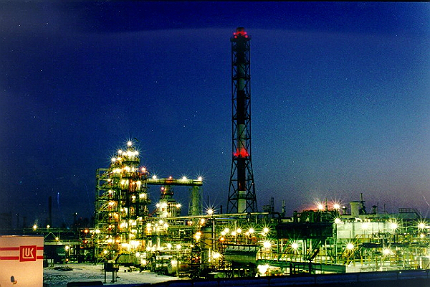 Located in Volgograd Oblast, southern Russia, Volgograd Oil Refinery is one of the four major refineries operated by LUKOIL in Russia. The refinery produces a range of fuels and lubricants, including gasoline, diesel, lubricants, fuel oil and jet fuel.

A modernisation and expansion project was completed at the refinery in 2016 to increase its production capacity and meet the Russian Government’s tightened fuel specifications.

The project increased the refinery’s capacity from 11 million tonnes per annum (Mtpa) to 15.7Mtpa, along with an increase in high-octane petrol production.

The facility’s oil refining depth was also increased from 83% to 95%.

Volgograd refinery processes a blend of light West-Siberian and Lower-Volga crude oil, which is supplied via Samara-Tikhoretsk pipeline.

The refinery’s petroleum products are transported by road, rail and river.

TThe refinery has been operational since 1957, and first came under LUKOIL’s ownership in 1991. The complex has undergone a series of upgrades since then.

The initial refining and gasoline reforming units were rebuilt in 1994.

Automatic equipment for the blending of gasolines was introduced at the refinery in 1998, whereas diesel fuel hydro-treatment, naphtha stabilisation and saturated hydrocarbon gas fractioning facilities were launched between 1998 and 2001.

The refinery switched to the production of Euro-3 standard motor gasoline in 2008. It also started producing Euro-4 compliant diesel fuel, with sulphur content below 50ppm, from the middle of 2008.

An inert gas production unit and short-cycle absorption unit for concentrated hydrogen production were launched during 2009 and 2010.

Construction of a delayed-coking unit at Volgograd refinery was completed towards the end of 2011, which allowed the facility to increase its annual oil-coke production capacity by 100,000t.

A new diesel-fuel hydro treatment unit with a capacity of three million tonnes per year was commissioned at the refinery in the third quarter of 2012.

In addition to producing diesel fuel, the unit has the capacity to hydrotreat 200,000t of coking gasoline per year, which is expected to increase the refinery’s high-octane gasoline output.

The refinery began producing Euro-5 compliant diesel fuel with sulphur content below 10ppm following the commissioning of the hydrotreatment unit.

"The refinery produces a range of fuels and lubricants, including gasoline, diesel, lubricants, fuel oil and jet fuel."

The Deep Conversion Complex for vacuum gas oil consists of a 3.5Mtpa hydro-catalytic cracking unit with a conversion ratio up to 75%, a sulphur recovery unit, a hydrogen production unit, an amine regeneration unit and a sour water stripping facility. Construction of the complex began in 2014 and was completed in 2016.

Técnicas Reunidas was awarded the engineering, procurement and construction (EPC) contract for the Vacuum Gasoil Deep Conversion Complex at Volgograd Refinery in February 2013, which is valued at more than $1.4bn.

The Spanish engineering company was also responsible for the development of Front End Engineering and Design (FEED) of the complex under a contract awarded in June 2011.