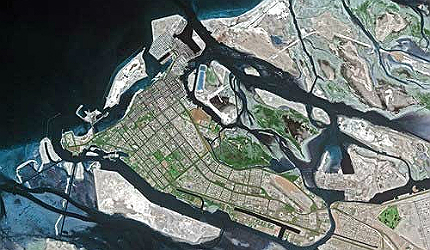 The Abu Dhabi crude oil pipeline project, also known as the Habshan-Fujairah pipeline, was initiated by the International Petroleum Investment Company (IPIC), which is owned by the Abu Dhabi Government.

It was fully operational in June 2012. The project aims to secure supply of crude oil and reduce oil transportation through the Straits of Hormuz.

“The crude oil is transported from Abu Dhabi’s main field to a crude reservoir in Fujairah.”

The 48in-diameter pipeline is designed to export about 1.5 million metric barrels a day (MMBPD) of crude oil, equivalent to more than half of the UAE’s total crude oil export. The pipeline’s maximum capacity, however, can be increased to 1.8MMBPD at a later stage.

The crude oil is transported from Abu Dhabi’s main field to a crude reservoir in Fujairah. Thereafter, the oil is loaded onboard tankers outside the Persian Gulf.

“The pipeline originates at Habshan and ends at Fujairah, UAE, covering a distance of 380km.”

The Abu Dhabi pipeline was completed in March 2011. The original completion date was 2009, but was delayed because of a congested market and difficulty in procuring materials. The pipeline reached its full capacity in June 2012.

The new pipeline is expected to reduce IPIC’s dependency on oil terminals in the Gulf, enhance export potential on the eastern seaboard of the UAE and reduce shipping traffic in the Strait of Hormuz.

The project was conceptually designed by Tebodin in 2006. ILF Consulting Engineers was selected to provide project management services in April 2007. The contract for the environmental impact assessment study was awarded to the URS Corporation in September 2007.

Contracts for the topographical survey and geotechnical survey were awarded to Maps Geosystems and the Fugro Middle East / Arab Centre for Engineering Studies in September 2007.

Around 225,000t of coated steel pipes were used for the pipeline. The total value of the contract was $460m. Sumitomo supplied 100,000t of large diameter welded line pipe for the project.

In November 2009, CPECC awarded a $21m contract to ABB for the design and supply of integrated electrical equipment for the pipeline. ABB provided electrical systems, 33kv gas insulated switchgear and resistors, ring main devices and capacitor banks. ABB also supplied protection panels, fault monitoring equipment and substation control and supervising equipment for the project. All the systems are based on ABB’s 800xA system.

A sub-contract was given to Van Oord Offshore in December 2008 and included offshore installation of three pipelines of around 13km and three single point mooring systems. These pipelines were trenched and backfilled.

The contract work was carried out by Van Oord and Bluewater Energy, which also provided the mooring system and related engineering. It was completed in the second quarter 2010.