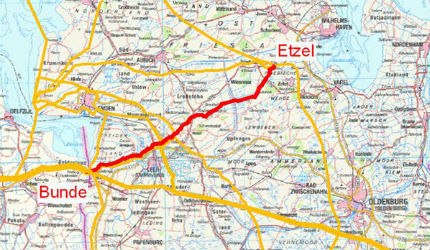 Bunde-Etzel Pipeline (BEP) is a 37-mile long natural gas export pipeline that connects the gas storage facilities in Etzel, Germany, to Bunde, located on the German / Netherlands border. The pipeline extends further to the Dutch gas network at Oude Statenzijl.

The pipeline is capable of being put to use in both flow directions. Commissioned for operation in December 2011, the project cost was estimated to be around $81m.

The pipeline is owned and operated by Bunde-Etzel-Pipeline Company, a joint venture created in 2007 by seven European energy companies that either own or operate gas storage facilities in Etzel.

Purpose of the BEP project

"BEP was constructed with the aim of preventing unintended variations in the supply of natural gas."

Western Europe enjoys an ample flow of natural gas and large pipeline infrastructure. The region, however, faces a shortage of gas storage capacity and hence cannot meet peak demands for an uninterrupted supply of gas.

BEP was constructed with the aim of preventing unintended variations in the supply of natural gas. The pipeline facilitates storage by connecting to three salt caverns in Etzel. The project was undertaken with the dual purpose of feeding natural gas into the internal gas grid of Germany and securing gas supplies for Gasunie, a Dutch natural gas infrastructure and transportation firm, during peak demand.

The pipeline was also required to effectively use the new and expanding storage facilities which IVG Caverns had been building to meet the increasing demand for gas. IVG Caverns is the company responsible for the operation of caverns for both crude oil and gas in Etzel.

Planning and design of the Bunde-Etzel Pipeline

The planning of the BEP project was challenging. The project developer had to enter into several agreements with the land owners, administrative districts and environmental protection groups. Furthermore, the pipeline track was bounded by stringently enforced rules.

One such rule was that the pipes had to be placed in a straight line and the pipeline as a whole had to be as short as possible. This was done to minimise any negative impacts on the surrounding environment.

The pipeline is built from high-tensile welded steel pipes, each measuring 18m in length and 1,200mm in diameter. Each pipe is coated with a three-layer polyethylene (PE) system in order to protect from corrosion.

The minimum depth at which the BEP is laid is one metre. The pipeline has an operational capacity of 4.5 million cubic metres per hour and is designed for an operating pressure up to 1,450psi.

Three block valve stations have been built to provide protection to the pipeline system. These are installed equidistant from each other. In the event of emergency or planned maintenance, the affected section of the pipeline is blocked by the adjoining station.

Cleaning, routine safety inspection and testing are carried out by means of pipeline inspection gauges (PIGs).

The BEP is integrated with an advanced supervisory control and data acquisition (SCADA) system to monitor and appraise the gas flow in both directions.

"The BEP is integrated with an advanced supervisory control and data acquisition (SCADA) system to monitor and appraise the gas flow in both directions."

In addition, the pipeline makes use of the stoner pipeline simulator (SPS), which is a pipeline management software developed by GL Noble Denton. The software helps in safe and efficient operation of the pipeline by providing real-time leak detection and location.

Ghizzoni, an Italian pipeline contractor, was the main contractor for the BEP project. The company was awarded a $74m contract in 2010 by the BEP joint venture.

ILF Consulting Engineers, a Germany-based multidisciplinary engineering and consulting firm, provided the permit application design and construction design. It was also responsible for the construction supervision.

Telvent, an information technology and industrial automation company, and a subsidiary of Schneider Electric, won a contract in June 2010 to supply a turnkey SCADA system for the BEP project.

Volvo Construction Equipment supplied its Volvo PL4611 pipelayers to lower-in the sections of the pipeline into the excavated trench. PipeSystemConsult (PSC) was commissioned to provide construction supervision, commissioning and start-up support for the project.

The two terminals, one each in Bunde and Etzel, and the three pipeline valve stations were built by Friedrich Vorwerk.