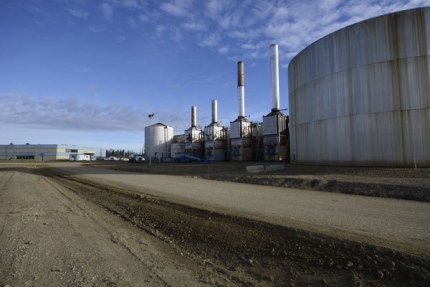 Carmon Creek project is an in-situ heavy oil project located in Northern Sunrise County, around 40km northeast of the Peace River in Alberta, Canada. The onshore field is owned and operated by Shell Canada, one of the 10 biggest oil and gas companies in the world.

The multi-billion-dollar project received regulatory approval from the Energy Resources Conservation Board (ERCB) and the Alberta Energy Regulator in April 2013, for a project application submitted in January 2010. Shell finally decided to implement the project in October 2013. First production is currently slated for 2015, and the field is expected to remain operational for 35 years.

Shell expects to process around 80,000 barrels of bitumen per day (bpd) from the project using the latest vertical steam drive (VSD) thermal recovery and initial cyclic steam stimulation (CSS) processes. The project is expected to generate around 1,000 jobs during construction.

The Carmon Creek project site is located near Peace River oil sands. Shell has been producing bitumen from the region using steam recovery methods since 1979, through the Peace River In Situ Project (PRISP).

Shell Canada submitted the application for the Carmon Creek heavy oil project in late 2006, proposing a 100,000bpd capacity. The company submitted a revised application in 2010, reducing the planned capacity to 80,000bpd. The new project will increase the bitumen production capacity at Shell’s existing Peace River Complex from 12,500 bpd. The complex was opened in 1986 as part of the Peace River Expansion Project (PREP).

The Detroit Heavy Oil Upgrade Project was launched by Marathon Petroleum Company in June 2008 to upgrade its refinery in Detroit, US.

The project will include construction of 95 well pads, two central processing facilities (CPF), and other associated facilities. Thermal injection wells, production wells, disposal wells, utilities, and other support infrastructure will be installed. Shell plans to develop 18 well pads by 2018 and the remaining at a rate of three pads a year. The well pads will feature well heads, pump jacks, piping manifolds, an electrical distribution system and other facilities. Each well pad will have 48 vertically-drilled wells and will operate for 10 to 15 years.

The CPFs will feature cooling and heating glycol systems, an emergency power system, a potable water supply system, a sewage treatment system, a drainage and pump system, a vapour recovery unit, a flare system, and nitrogen supply units. Each CPF will have the capacity to process 40,000 bpd. The well pads will be connected to the CPFs via a steam distribution pipeline, a production gathering system, a casing vent gas gathering system and a diluents supply pipeline.

Other support facilities will include an acid gad disposal pipeline, wastewater treatment plants, and saline groundwater pipelines. The existing pipeline systems and stations, and the Haig Lake terminal will also be upgraded under the project.

The pipeline distribution and gathering system will route back the fluids produced from the wells to the CPFs. The system will distribute steam to the well pads. The CPFs will separate bitumen, water and gas from the collected fluids. The bitumen oil will be transported to the Haig Lake terminal after the treatment and diluents are added, to minimise its viscosity.

The gas will be further treated to remove hydrogen sulphide and carbon dioxide. Solids and residual hydrocarbons will also be removed from the water before producing steam. The removed gases will be re-injected into the strata below the reservoir.

The steam generated from the cogeneration facilities, supported by steam-water boilers, will be injected into the reservoir. The injected steam will reduce the thickness of bitumen and facilitate easy flow of the bitumen to the well bore. The bitumen oil will be lifted to the surface by pumps and then exported to Northern American refineries. The cogeneration units are expected to produce an average output of around 630MW a year.

ATCO Structures & Logistics (ATCO) will construct a housing facility at the site to accommodate the workers involved with the development of the Carmon Creek project. The contract was awarded in October 2013.