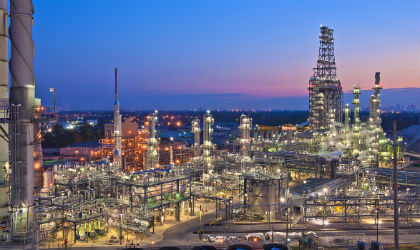 The Detroit Heavy Oil Upgrade Project was launched by Marathon Petroleum Company in June 2008 to upgrade its refinery in Detroit, US. It is the only refinery located in the Michigan region.

The upgrade enables the refinery to produce 400,000 gallons of additional motor fuels per day. It is expected to contribute $230m in tax revenues until 2030.

Around 60 full-time jobs and 75 contractor positions have been created by the project.

The Detroit refinery, built in 1930, is spread over an area of 250 acres (101ha). It can process a wide range of crude oils, from light to heavy sour. Major processes of the refinery include crude distillation, catalytic cracking, hydrotreating, reforming, alkylation and sulphur recovery.

The products produced by the refinery include gasoline, diesel, asphalt, propane and sulphur. These products are distributed through pipeline, truck, rail and barge.

Capacity extension at the heavy oil refinery in Detroit

"By upgrading the refinery, Marathon will be able to reduce its crude costs."

The upgrade of Detroit refinery was launched to enable the processing of Canadian heavy crude. Marathon owns interests in several Canadian oil sands projects and has secured a steady supply of crude oil. Canada’s oil resources are the third largest in the world. It is however a heavy crude containing a mixture of sand, clay, water and bitumen.

Canadian crude costs less than light sweet crude from the US. By upgrading the refinery, Marathon will be able to reduce its crude costs.

The expansion will also reduce the refinery’s reliance on crude oil supply from the Gulf Coast which has been known to be affected by weather and operational issues. It will also ensure a secure supply of transportation fuels to Michigan.

The upgrade project added new equipment to the refinery enabling it to process heavy and viscous crude oils. The equipment included a 28,000 barrels per day delayed coker unit, which will enable the refinery to produce liquid petroleum fuel blend components and higher quality gasoline, diesel and petroleum coke.

A sulphur recovery complex was added to recover the sulphur removed from fuels. The complex has a capacity of 280t per day. A catalytic reduction system to control nitrogen oxides was also installed.

The upgrade also added a 33,000 barrels per day distillate hydrotreater which will extract sulphur from diesel and kerosene. It will reduce the amount of sulphur emissions from the refinery.

A new hydrogen plant has been installed to supply hydrogen to the hydrotreating units which will remove sulphur from motor fuels. The new plant has a capacity of 58 million standard cubic feet per day. Installation of 180 heat exchangers and 16 compressors was also part of the upgrade.

The project required installation of 7,700 piles and 100 miles of pipe. About 50,000 cubic yards of concrete was used for the construction of various units.

"A 1.5 mile long pipeline was installed to transport Canadian crude oil to the Detroit refinery."

Fluor Corporation was awarded the front-end engineering and design (FEED), and engineering, procurement and construction (EPC) contract for the project.

EC Korneffel carried out piling works for the project.