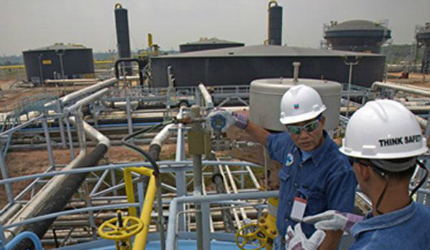 Duri oil field is approximately 18km long and 18km wide. It is located in the Riau Province, in the South Sumatra Basin on the eastern coast of Sumatra, Indonesia.

Duri Field was discovered in 1941. The onshore oil field was brought on stream in 1954. The primary production from the field peaked at 65,000 barrels per day (bpd) in the mid 1960s. The oil output of the field is sent via a 25in pipeline to the port of Dumai for sale.

Following the decline of it production yield due to the drop in natural reservoir pressures, the oil field started using steam-flood technology from 1985. Duri is considered to be one of the largest steam-flood developments in the world.

The daily production from the Duri field currently averages to approximately 185,000 barrels accounting for nearly half of CPI’s total production.

The Tangguh gas fields, situated near the Bintuni Bay region of West Papua province, were discovered by ARCO Exploration in the mid-1990s.

The oil field continues to undergo expansion to sustain production and increase oil recovery. A total of 186 additional production wells and 56 steam-injection and observation wells were drilled in the producing areas of the oil field in 2012.

A pilot steam-flood project was launched at the Indonesian oil field in 1975 in order to improve its production. The steam-flooding technology is used for enhancing oil recovery by injecting steam into the oil reservoir. The technology was first deployed at the field in 1985.

The gas meant for steam-flooding is supplied by the Grissik-Duri pipeline. The steam-flood project receives power from the Chevron-operated 300MW North Duri Cogeneration Plant.

The steam-flooding technology, by 2008, enhanced the Duri oil production by more than three times and allowed the recovery of more than two billion barrels of crude oil.

A total of 12 development areas in the field have been developed with the Duri Steam Flood project. As of 2013, approximately 80% of the Duri field was steam injected.

The North Duri Field Area 12 Expansion involved drilling and development of new production wells in the northern area of the Duri Field.

Production from the oil field expansion project started in November 2008. Steam-flood technology was deployed at the project area in 2009.

North Duri Development Area 13 is the latest expansion project at Duri. The Engineering, Procurement and Construction (EPC) contract for the project was awarded in June 2012.

The $500m expansion project broke ground in October 2012. A total of 539 new wells including 358 producing wells, 145 steam injection wells and 36 temperature observation wells will be drilled as part of the North Duri Development Area 13 project.

The expansion project is scheduled for completion by the end of 2013. It will add 17,000 barrels of oil to the Duri field’s daily production capacity.

A consortium led by the Indonesian company Wijaya Karya (WIKA) was awarded an EPC contract worth $182.9m for the North Duri Development Area 13 expansion project. Other partners of the consortium include Inwha Indonesia and Singgar Mulia. WIKA’s share in the contract is $146m, which is approximately 80% of the contract value.