Length of the pipeline 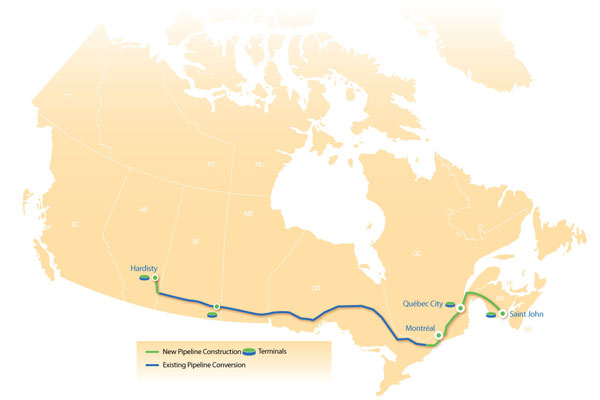 Energy East Pipeline (EEP) is a new 4,500km long crude oil pipeline being planned by TransCanada Pipelines. The new pipeline will run from Hardisty to Saint John in Canada. The pipeline construction cost is expected to reach around $12bn.

Regulatory approval for the pipeline from the National Energy Board (NEB) will be obtained upon completion of the environmental assessment studies. Construction is expected to start in 2016 and be completed by 2018.

The new pipeline will expand the oil transportation network of Canada and reduce the demand for foreign oil imports in Canada. It is expected to serve Montreal and Quebec City by 2017 and St. John by 2018.

The project is expected to create up to 1,000 jobs.

Energy East will be transmission pipeline that will be used to transport crude oil to refineries in eastern Canada.

The pipeline will be made up of long, flat sheets of high-strength steel. The tube shaped sheets will be welded together to form a pipeline. The existing sections of the pipeline have a diameter of 1,067mm, while the new sections will be 1,067mm in diameter.

"The new pipeline will expand the oil transportation network of Canada and reduce the demand for foreign oil imports in Canada."

The pipeline will feature four oil tank terminals, between 65 to 70 pump stations, and two marine terminals in the Québec City and Saint John areas.

Route of the crude oil pipeline between Hardisty and Saint John

The pipeline will start from Hardisty, Alberta and end at Canaport in Saint John, New Brunswick. It will run for 275km in Alberta, 60km in Saskatchewan and Manitoba, 105km in eastern Ontario, 645km in Québec and 375km in New Brunswick.

The pipeline will be used to transport both light and heavy oil. It will be able to carry 1.1 million barrels of crude oil a day (bpd) when fully operational. It will have an initial capacity to carry about 850,000 bpd from Alberta and Saskatchewan to refineries in eastern Canada.

"The marine terminals will enable access to other markets by ship."

The pipeline design will be based on the highest quality design standards. Welding checks will be performed by X-rays or ultrasonic rays during construction to detect the defects in the pipeline. The pipeline will be coated to protect from corrosion.

A joint venture of Irving Oil and TransCanada will build, own and operate the new $300m deepwater marine terminal at Irving Canaport in Saint John. The engineering and design of the marine terminal will begin in 2015.

The Big Foot Oil Pipeline in the US Gulf of Mexico will be constructed by Enbridge Inc, a Canada-based company.