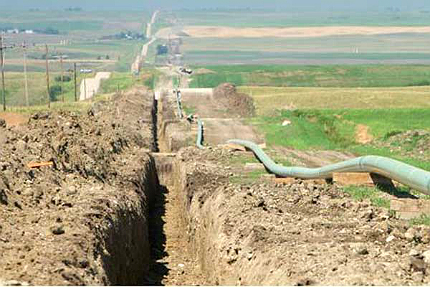 The Flanagan South Pipeline is an interstate crude oil petroleum pipeline developed by Canadian energy company Enbridge, in the US.

The 593-mile (965.6km) pipeline with a 36in-diameter runs from Flanagan, Illinois, to Cushing, Oklahoma, passing via Missouri and Kansas.

Construction contracts for the $2.7bn pipeline project were awarded in 2013. Construction work began in the same year. The pipeline was operational in December 2014.

Flanagan South Pipeline has an initial capacity of 585,000 barrels per day (bpd). It delivers crude oil supply from North Dakota’s Bakken region and western Canadian region to the US Gulf Coast refineries.

Route of the Flanagan South Pipeline

The new pipeline runs adjacent to the Spearhead Pipeline with deviations at a few locations.

The crude oil supplied through Flanagan South Pipeline to Enbridge’s Cushing terminal is sent to Gulf Coast refineries via the Seaway Crude Pipeline System, which is jointly owned by Enbridge and Enterprise.

"The 593-mile (965.6km) pipeline with a 36in-diameter runs from Flanagan in Illinois to Cushing in Oklahoma."

The Flanagan South Pipeline project was developed by Enbridge Pipelines, a subsidiary of Enbridge.

The pipeline project was mooted in 2011 as part of Enbridge’s plan for expanding its existing pipeline system to improve the supply of North American crude oil production to the Gulf Coast refineries.

Unlike its competitor TransCanada’s proposed 835-mile Keystone XL Pipeline, Enbridge’s Flanagan South Pipeline Project witnessed less criticism for its route along the right-of-way of an existing pipeline originating in US territory.

The 593-mile pipeline originates at Pontiac near Flanagan in Illinois and terminates at Cushing in Oklahoma. A total of seven pump stations, including one at the Flanagan terminal, were built along the pipeline. The new pipeline utilises existing pumping station sites and electrical power connections along the Spearhead Pipeline.

The new pipeline, together with the Spearhead Pipeline, transports up to 775,000bpd of North American crude oil from Illinois to the Cushing terminal, which is one of the biggest oil storage hubs in the US.

The crude oil from Cushing is sent via the reversal Seaway Pipeline to the Gulf Coast. The Seaway Pipeline system underwent a $1bn expansion to more than double its southbound takeaway capacity to 850,000bpd in July 2014.

Construction of the Flanagan South Pipeline began in August 2013 and was divided into four spreads under two contract packages.

"Flanagan South Pipeline has an initial capacity of 585,000 barrels per day (bpd)."

The Spread 3 ranged up to 3.75 miles north of Mound City, Kansas. The Spread 4 comprised the last section of the pipeline construction ending at Cushing, Oklahoma.

The pipeline’s construction started with simultaneous works for Spread 1 and Spread 3 by two separate contractors.