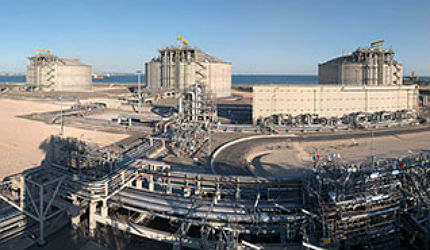 Fos Cavaou liquefied natural gas (LNG) terminal is located at Fos-sur-Mer near the Cavaou peninsula in southern France. Opened in April 2010, the terminal has a regasification capacity of 8.25 billion cubic metres. It is spread over an area of 80ha and was built with an investment of €700m ($926m).

The terminal is owned by Fosmax LNG (formerly Société du Terminal Méthanier Fos Cavaou, or STMFC), which is a joint venture between GDF Suez (71.99%) and Total (28.10%). Elengy, a subsidiary of GDF Suez, operates the terminal. It also operates two other terminals in France, Montoir-de-Bretagne and Fos Tonkin.

Demand for natural gas in Europe is growing while production is on the decline. Use of natural gas is also being promoted as it helps in reducing carbon dioxide emissions. The region is overly dependent on natural gas supplies from Russia, which may not be feasible in the future as demand further increases.

To secure future gas supply, the LNG reception capacity needs to be increased in Europe. The Fos Cavaou terminal was built to serve these needs.

"The location ensures the safety and security of LNG tankers and reduces the environmental impact."

Fos Cavaou is ideally located along the main LNG transport routes. It can easily receive natural gas from countries such as Egypt, Algeria and the Middle East.

The location ensures the safety and security of LNG tankers and reduces the environmental impact. It also enables gas to be supplied to the south of France and Europe.

Changes to requirements and subsequent delays

The Bonaparte LNG project covers the deployment of a floating, production, storage and offloading (FPSO) LNG facility in the Bonaparte Basin in the Timor Sea, off the northern coast of Australia.

The project was proposed in 2005, following an agreement signed between GDF Suez and Total. The two companies jointly created STMFC in 2006 and appointed the company in charge of developing the terminal.

Earth moving works at the site commenced in October 2004. Work on the foundation pile for the storage tanks started in February 2005.

In April 2005, the French Ministry for the Environment and Sustainable Growth suggested that the seismic requirements for the project needed to be increased from 6.0 to 6.5. The change in design requirements forced STMFC to suspend construction. The new requirements extended the construction schedule by eight months.

The terminal was originally scheduled for opening in 2007 but was further delayed. A piping accident in February 2008 delayed the opening of the terminal to 2009. The opening was further postponed due to the late arrival of the cargo to cool facilities at the terminal.

The terminal can handle LNG tankers with capacities of up to 260,000m³. It is equipped with one berth featuring four 16in arms to handle the LNG tankers. Natural gas from the tankers is unloaded and transferred into the storage tanks on land. The terminal includes three storage tanks with a capacity of 110,000m³ each. Natural gas is stored at a temperature of -1600°C in the tanks.

"The terminal can handle LNG tankers with capacities of up to 260,000m³ and includes three storage tanks with a capacity of 110,000m³ each.“

All the tanks and pipelines of the terminal are covered with nearly 52,000m³ of ultra-low-temperature insulation. Installation of the insulation required the construction of a factory workshop at the site to protect from Mistral, a gale which produces strong winds at 150km/h. The winds created hazardous working conditions which can cause the sheets and metallic materials to become displaced.

The factory workshop at the site enabled working in these tough conditions. All pipeline segments were transported into the workshop and coated with polyisocyanurate, a multilayered plastic hard foam. Polyisocyanurate protects from extremely low heat conditions.

Contractors involved in the LNG project

A joint venture between Sofregaz and Saipem was awarded the engineering, procurement and construction contract for the complete terminal.

BIS Prefal and BIS OKI installed the ultra-low-temperature insulation for the terminal.