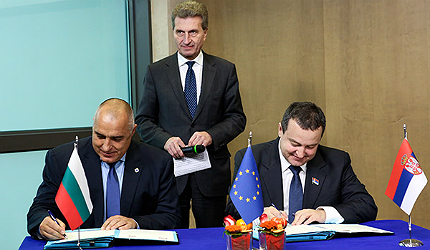 Gas Interconnection Bulgaria – Serbia (IBS) is a project which includes the construction of a 150km long pipeline which will connect the gas transmission networks of the two countries. The pipeline will run between Nis in Serbia to Dupnitsa, located near Bulgaria’s capital city of Sofia.

The pipeline will enable about 1.8 billion cubic metres (bcm) of natural gas to be delivered annually in both directions. The capacity of the pipeline will be expandable up to 4.5bcm/y.

IBS is one of many projects being undertaken by the Bulgarian Government to increase the security of supply in the region. Bulgaria imports 90% of its natural gas from Russia, the majority of it through Ukraine.

A dispute between Ukraine and Russia interrupted gas supplies to Bulgaria for two weeks in 2009. The interruption revealed the weaknesses in the gas transmission network in south-eastern Europe (SEE). In the wake of such incidents, interconnections have been identified as the best solution to ensure the security of supply.

"The pipeline will run between Nis in Serbia to Dupnitsa, located near Bulgaria’s capital city of Sofia."

In January 2012, Gastec was contracted to carry out the Environmental Impact Assessment (EIA) and feasibility study for the IBS project. An Operational Programme Competitiveness (OPC) has been set up to secure financing for the project. About 90% of the funds for the project will be provided under the OPC.

In December 2012, the governments of Bulgaria and Serbia signed a Memorandum of Understanding to create a gas interconnection between the two countries. A contract was subsequently signed during the same month between the Ministry of Economy, Energy and Tourism (MEET) and the Ministry of Regional Development and Public Works of Bulgaria, to design the interconnection. A preliminary agreement to build the pipeline was signed in 2010.

The feasibility study for the project was completed in January 2013. An operator for the project has not been chosen yet. A joint venture is expected to be created to operate the interconnection. Bulgartransgaz is providing technical expertise for implementation of the project.

Details of the European gas interconnection

The IBS pipeline will have a diameter of 28in and operate at a working pressure of 55 bar. Four routes have been developed for the pipeline, of which the second route is being favoured. The second route starts in Novi Iskar in Serbia and passes through the regions of Kostinbrod, Slivnitsa and Dragoman, before ending in Sofia.

The project will help in solving the problem of a lack of interconnectivity in the region.

"IBS is one of many projects being undertaken by the Bulgarian Government to increase the security of supply."

With the implementation of the project, Bulgaria will be able to diversify its sources of natural gas and reduce its dependence on one source.

The project is also expected to create jobs and support economic recovery of the region, especially Serbia.