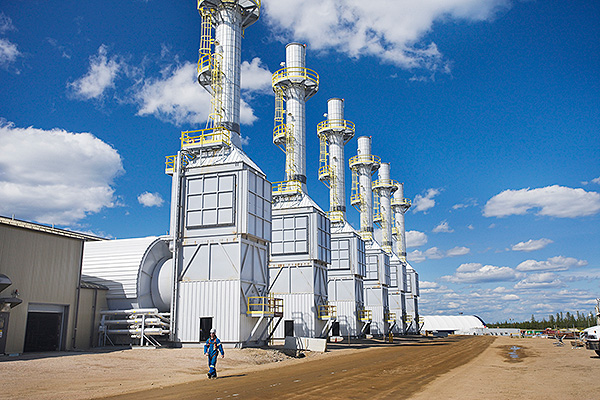 For more than 15 years, Cenovus has been applying a number of techniques for enhanced heavy oil recovery from the Wabiskaw formation at Pelican Lake. In late 2010, the company initiated a pilot project in the shallower Grand Rapids formation, which contains oil-infused sand. In December 2011, Cenovus applied for commercial development of the project. The Alberta Energy Regulator (AER) approved the plans submitted by Cenovus in March 2014.

Cenovus expects to make a decision on sanctioning and development plans for the project later in 2014. If sanctioned, Grand Rapids is expected to have a production capacity of 180,000 barrels of oil per day (28,600m3/d) upon full completion of all phases.

The estimated life of the project is 40 years.

The project will cover 3,291ha of area including the plant, well pads, camp, access roads, pipelines and others. The central processing site, which will house the oil treatment units, will cover an area of 1.5km².

The project will benefit from the existing infrastructure at the Pelican Lake operation, such as the roads, power infrastructure and accommodation camps, reducing the overall capital cost.

The project is planned to be developed in multiple phases, with total cumulative capacity expected to reach 180,000 barrels per day.

The generators will produce up to 86,248m³ of dry steam per day for injection into the wells. The bitumen will be blended with diluents for facilitating treatment and transportation through pipeline.

A total of 200 well pads are expected to be developed over the life of the project, supporting up to 3,700 well pairs. Up to six disposal wells are also planned to be drilled.

The gas produced from the wells will be used to fuel the steam generators, after sweetening to reduce the hydrogen sulphide (H2S) content in the gas.

New roads and pipelines are planned to be built for operating the wells and transporting the oil to the treatment units at the central processing site.Other infrastructure to be developed as part of the project includes power lines for electricity supply, and separate pipelines for fuel gas, oil transportation and diluents/condensate supply.

"A total of 200 well pads are expected to be developed over the life of the project, supporting up to 3,700 well pairs."

Cenovus also plans to incorporate Solvent Aided Process in addition to SAGD in future, if viable. The SAP involves co-injection of light hydrocarbons.

Details of the pilot project

The Grand Rapids pilot project was carried out to test the commerciality of the Grand Rapids Formation. The pilot project received approval from the Energy Resources Conservation Board in June 2010, which was followed by environmental approvals from Alberta in November.

Data from about 180 stratigraphic test wells drilled during the pilot phase helped to prepare the regulatory application and development plan.

The SAGD technology involves injection of steam into the upper well of a pair of horizontal wells drilled into underground formations that contain oil at deeper levels. The steam heats up the oil and causesitto flow into the bottom well so that it can be pumped to the surface.