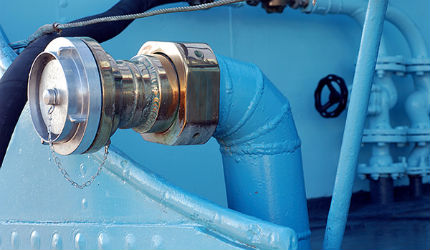 Gulfstream is a high pressure natural gas pipeline system that carries gas from the Mobile Bay area of the US Gulf of Mexico (USGoM) to Florida for distribution. Measuring 745miles (1,198km) in length, it is the largest pipeline and the first interstate pipeline in the GoM. It was put into commercial operation in June 2002. Fifth phase of the pipeline was commissioned in April 2011.

The pipeline’s diameter varies from 16in to 36in along its length. It has a transmission capacity of 1.29 billion cubic feet of natural gas per day, which is enough to generate clean electricity for about 4.5 million Floridian homes.

In January 2012, Rosen was contracted to undertake in-line inspection of the 36in diameter, offshore segment of the pipeline. The task will be realised in three phases.

"The onshore segment of the pipeline in Florida measures 294miles (473.1km), while the combined length of Alabama and Mississippi segments is 15miles (24.1km)."

The pipeline originates from a gas gathering system in Mississippi and terminates in Coden, a coastal fishing village in southern Mobile County, Alabama. Here, the gas is compressed at compressor station (CS) 410.

The pipeline traverses the GoM and comes out of the sea at Port Manatee, in northern Manatee County, Florida. It further runs onshore through southern Florida. It terminates in Pinellas County after crossing Polk and Martin Counties.

The onshore segment of the pipeline in Florida measures 294miles (473.1km), while the combined length of Alabama and Mississippi segments is 15miles (24.1km). The offshore segment that traverses the Gulf stretches 419miles (674.3km). The remaining 17miles (27.3km) consists of offshore processing segment.

Phased construction of the interstate pipeline in US Gulf of Mexico

The Big Foot Oil Pipeline in the US Gulf of Mexico will be constructed by Enbridge Inc, a Canada-based company.

The Gulfstream project was built in five phases. The first three phases were cleared for construction and operation in February 2001. The fourth and fifth phases were approved in October 2007 and March 2010 respectively.

The phase one of the Gulfstream pipeline project broke ground in May 2001, with offshore construction commencing in June of that year. The offshore segment of the mainline is 36in in diameter.

Placement of pipe in Tampa Bay was started in July and the construction in Florida was launched in October 2001. The pipeline was commissioned for operations in June 2002.

Construction on the second phase, which involved 110miles (177km) extension of the main pipeline, was launched in July 2004. It extended the pipeline from Polk County to Martin County. The segment was put into service in February 2005. The pipe’s diameter in this segment is 30in.

The third phase entered service in August 2008. It advanced the pipeline further into south-eastern Florida. The pipeline in this segment extends a little over 34miles (54.7km) from Station 712 to Station 705 and has a diameter of 30in.

Construction on the fourth phase was started in 2008. It was commissioned for service in January 2009. It involved 17.5miles (28.1km) extension of the mainline to Bartow Power Plant located in Pinellas County. It also involved installation of additional compression facilities in Coden, Alabama, and Manatee County, Florida. The segment is operated by Progress Energy.

The fifth phase, which was commissioned for operations in April 2011, expanded the capacity of the mainline by 35,000 dekatherms per day. The phase involved installation of a 20,500HP gas turbine compressor system at CS 420. In addition, the two existing compressor units at the station were fitted with new impellers to cope with the increased flow of the pipeline.

Berg Steel Pipe Corporation, a subsidiary of Europipe, was contracted in March 2000 (firm purchase order placed in November 2000) for production and delivery of majority of the large diameter pipes for the offshore section of the project and 36in pipes for the onshore segment in Florida. The purchase order was valued at $310m.

"Engineering, design and procurement support services for the expansion of CS 420 were rendered by Alliance Engineering, a subsidiary of Wood Group."

Sheehan Pipe Line Construction Company, based in Oklahoma, was contracted in April 2001 to build the initial onshore segments of the project in Florida. The company was again contracted in May 2004 to build a 110 mile (177km) extension of the mainline from Polk County to Martin County in Florida.

Geotechnical engineering, horizontal directional drilling design and construction consulting services for three crossings, which fall on the route from station 712 to station 705 (phase three), were provided by GeoEngineers.

Engineering, design and procurement support services for the expansion of CS 420 were rendered by Alliance Engineering, a subsidiary of Wood Group.