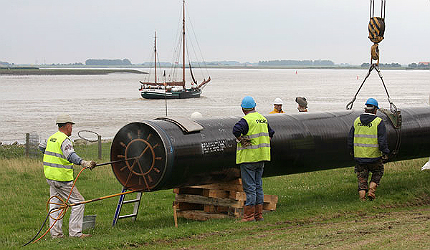 Jhe Jemgum underground natural gas storage facility is being developed in Lower Saxony, Germany. WINGAS and EWE are jointly developing the facility. WINGAS is a joint venture between Gazprom and Wintershall. The first phase of the project began its operations in September 2013 and the final phase will conclude in 2019-’20.

"The Jemgum facility is being built to increase energy supply security in Germany. The country is the largest natural gas importers in the world."

The Jemgum facility is being built to increase energy supply security in Germany. The country is the largest natural gas importers in the world and its domestic demand is rising constantly.

By 2018, Germany is expected to import 70% of its natural gas to meet the demand. Natural gas storage facilities such as Jemgum will provide flexible and secure supply of energy throughout the year for the country.

The facility is also ideally located near the European natural gas transmission pipeline network and receives gas from Russia, the North Sea and Denmark.

Construction of the facility began in July 2008. It will include up to 33 caverns, of which 15, each with a capacity of 700,000m³, are being built by EWE. The remaining 18 are being developed by WINGAS. The two set of caverns are created jointly by EWE and WINGAS, but operated individually by the two companies.

"WINGAS and EWE are jointly developing the facility. WINGAS is a joint venture between Gazprom and Wintershall."

VNG agreed to cooperate and develop the facility with WINGAS in September 2009. VNG owns one third of WINGAS’ storage capacities and act as the storage operator.

By June 2011, construction of ten caverns was completed and the leaching process commenced. The caverns have been drilled into a salt dome of the Zechstein formation to a depth of 1,600m. Each cavern is 400m in height and 80m-wide. The caverns are being drilled from various locations of the site to penetrate the deep geological structure.

As of April 2012, seven caverns have been leached. They were ready to accept gas in a year’s time. A water intake facility was built at the Ems River to draw water for the leaching process of the caverns. The brine solution created through the leaching process is discharged through a 40km pipeline into the North Sea to reduce the environmental impact.

Construction of the gas handling facilities started in July 2010. Drilling of the remaining caverns is expected to continue until 2020.

A 14km pipeline connects the facility to the Dutch gas pipeline system. WINGAS received approval to construct the pipeline from the Lower Saxony State Authority for Mining, Energy and Geology in April 2012. The pipeline has a diameter of 90cm and is able to transport 1.8 million cubic metres of natural gas each hour.

The pipeline starts from the Jemgum facility towards Bunde and onto Oude Statenzijl where it connects with the existing pipeline network. It took six months to construct. In some areas, a trenchless method is used to construct the pipeline to reduce the environmental impact.

The facility provides access to market areas such as GASPOOL and NetConnect Germany (formerly, BEB and E.ON) and TTF in the Netherlands.

DEEP, Underground Engineering and KBB Underground Technologies were responsible for drilling and geological planning of eight caverns drilled for the facility.

WINGAS’ subsidiary, astora, is responsible for the construction and operation of the facility.