MW Kellogg, a subsidiary of KBR 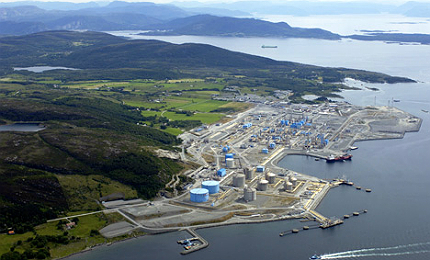 The Karsto complex, which lies 30km north of Stavanger in Norway, processes rich gas from central parts of the Norwegian Continental Shelf (NCS), including the Asgard and Mikkel fields, and unstabilised condensate from the Sleipner area of the North Sea.

The plant is owned by the Gassled joint venture of 11 oil and gas companies on the NCS and operated by Norwegian state-owned Gassco. Statoil was the second-biggest shareholder in Gassled with a 29% stake.

The company, however, divested a 24.1% stake for $3.25bn in July 2011. It holds five percent interest in Gassled as the technical service provider of the Karsto plant. State-owned Petoro holds 45.7%.

Karsto started production in mid-1985. It had since undergone a series of upgrades and expansions. The dedicated Sleipner condensate plant came online in October 1993 and Karsto has been processing gas from Asgard and neighbouring fields since October 2000.

The Karsto complex covers an area of 520 acres while the plant lies in 270 acres. The plant processes gas and condensate transferred from 30 fields in Norway. The processing plant was shutdown from August to September 2010 to conduct a comprehensive maintenance and inspection programme. Various upgrades and modifications were completed during the shutdown.

The five-year modernisation programme of upgrading the facilities at the Karsto plant was completed in December 2012.

Processing at the Norwegian Karsto plant

"Karsto started production in mid-1985. It had since undergone a series of upgrades and expansions."

Rich gas arrives at the complex via the Statpipe and Asgard Transport pipelines before being separated into its various components.

Natural gas liquid (NGL) is separated from the rich gas before being fractionated into methane, ethane, propane, iso and normal butane, naphtha and stabilised condensate.

The propane is stored in two artificial rock caverns that have a combined capacity of 90,000t, while normal butane, isobutane, naphtha and ethane are held in conventional tanks. Karsto is ranked as the world’s third-largest export port for propane and butanes.

The condensate is stabilised and fractionated in a dedicated plant at a rate of 4mtpa and shipped from Karsto by sea.

The methane and some ethane is transported on through the Statpipe / Norpipe system to Emden and the 658km, 42in Europipe II trunkline to Dornum, both on Germany’s north coast, while the NGLs are exported by ship. About 950,000t of ethane is produced annually and sold on long-term deals to Vienna-based plastics group Borealis, chemicals company Noretyl and Norwegian aluminium producer Norsk Hydro.

In October 2003, UK company MW Kellogg (MWKL) completed the $100m New Extraction Train (NET1) project as part of a long-term frame agreement it struck with StatoilHydro that year. NET1 allowed Karsto to receive and process rich gas from the Mikkel field in the Norwegian Sea through the 42in, 707km Asgard Transport pipeline.

By late 2005, MWKL had completed the Karsto Expansion Project (KEP2005), also worth $100m, allowing rich gas to be brought in from the Kristin field on the NCS, again via Asgard Transport. KEP2005 also increased Karsto’s daily rich gas capacity by 20% to 88 million cubic metres.

KEP2005 also included the building of a plant for removing carbon dioxide from sales gas and expanding capacity for ethane separation by more than 50% to the 950,000tpa level.

The latest phase of upgrade was a series of projects under the collective title of KEP2010. The main elements of KEP2010 included upgrade of the instrument and utility systems, mechanical modifications and new installations, such as an emergency generator building. The $170m contract for the engineering work of this phase was awarded to MWKL. The subcontractors involved in the project were Norconsult and Sorco.

"Rich gas arrives at the complex via the Statpipe and Asgard Transport pipelines before being separated into its various components."

The first project under this Nkr8bn ($1.3bn) tranche of investment was completed in 2008, while the others were completed in December 2012. In late July 2009, MWKL was also awarded a contract to provide pre-engineering for a Double Inlet Crossover (DIXO) project at the plant.

The goal of this project was to provide what StatoilHydro describes as "increased regularity and blending possibilities" for gas supplies coming in to the facility using the two crossover lines. This contract came on the back of an earlier feasibility study for the DIXO project as well as pre-engineering of an NGL metering upgrade project at the site. The $318m project was completed in 2012.

In June 2011, Aibel was contracted by Statoil to modify the Sleipner facility. The Nkr375m ($69m) contract includes upgrades to three compressors at Karsto and five export compressors at Kollsnes. Modification works are expected to be completed by July 2013. The project will enable the Karsto plant to process light oil produced by the Gudrun field starting from the first quarter of 2014. Aibel is also part of the KEP2010 upgrade project.

Aibel contracted Foster Wheeler in August 2011 to provide detailed engineering design for the project. Foster Wheeler signed a three year agreement with Statoil in December 2012. The agreement allows Foster wheeler to carry out FEED studies at the Karsto and Kollsnes gas plants. The contract can be optionally extended for two more years if required.

The modernisation has increased the production capacity of the plant. The plant can now produce 112t of ethane, 385t of propane, 76t of i-butane, 145t of n-butane, 106t of naphtha and 351t of condensate per hour for export.

The Snøhvit LNG project was constructed to exploit the resources of three gas fields in the Barents Sea: Snøhvit, Albatross and Askeladd (250m to 345m deep), which lie about 140km northwest of Hammerfest in Norway.

Ormen Lange is the largest gas field under development on the Norwegian continental shelf (discovered by Hydro in 1997).