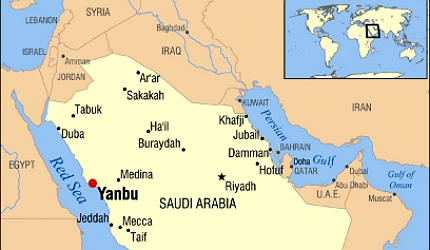 Luberef Yanbu base oil refinery is located on the Red Sea at Yanbu, near Dhahran, Saudi Arabia. It was built on 165ha in the industrial park. The refinery is operated by Saudi Aramco Lubricating Oil Refining Company (Luberef).

The refinery is engaged in the production of API Group I straight run grades and byproducts, including naphtha, diesel oil, and drilling fluid. It mainly provides services to the domestic market. The products from the refinery are transported through truck loading, interconnecting pipelines and four marine terminal facilities.

The refinery’s expansion was initiated in January 2011, which is expected to be completed by 2016.

"The expansion of the Yanbu lube base oil refinery, which is also referred to as Luberef II, began in January 2011."

The expansion of the Yanbu lube base oil refinery, which is also referred to as Luberef II, began in January 2011. It is expected to be completed by 2016. The expansion is expected to increase the overall annual capacity of the refinery from the current 280,000t to 710,000t of base oil.

The expansion is aimed at increasing the production of API Group II and Group III base oils to meet the rising demand for these products in domestic and international markets. The estimated investment for the expansion of the refinery is $1bn.

The expansion includes the construction of a new sulphur treatment complex, hydrofinishing unit and hydrocracker. It will also expand the capacity of the vacuum distillation unit from the existing 26,000 barrels per day (bpd) to 40,000bpd. Additional storage tanks will be built as part of the expansion.

The capacity of the propane de-asphalting unit will be increased, from the current 6,500bpd to 12,500bpd. The existing electrical facilities at the refinery will be extended and upgraded, plus a new cooling tower for water cooling system will be constructed.

History of the Saudi Arabian refinery

Lhe Luberef refinery was established in 1976. It began operations in 1983. It was established as a 70/30 joint venture between Saudi Aramco and ExxonMobil. The 30% share of ExxonMobil was acquired by the Jadwa Industrial Investment Company in November 2007. In July 1996, the Saudi Arabian Government transferred its 70% stake to Saudi Aramco Lubricating Oil Refining Company (Luberef).

Facilities and technology at the Luberef II refinery

The Luberef II refinery has an atmospheric distillation unit, propane de-asphalting unit and a diesel hydro-treating complex. It has more than 74 tanks in the tank farm, with a capacity of 12 million barrels.

"The expansion includes the construction of a new sulphur treatment complex, hydrofinishing unit and hydrocracker."

Foster Wheeler supplied two hydrotreaters and a cogeneration plant for the refinery in 2002. The diesel hydro-treating complex at the refinery was commissioned in 2005. In 2009, WorleyParsons was awarded front-end engineering and design (FEED) contract for the clean fuels project.

The Rose technology uses a de-asphalted oil stripper, as well as an asphaltene stripper to recover and recycle the dissolved solvents.

The technology will also extract the de-asphalted oil from asphaltene rich feedstock. It will also help in increasing the production of brightstock and byproducts.

In March 2011, KBR was awarded with a contract to implement its SDA technology for the refinery’s expansion.

In October 2012, Samsung Engineering was awarded an $871m engineering, procurement, construction and commissioning (EPCC) contract for the refinery’s expansion. The scope of the contract includes providing a new hydrocracking unit with 23,000bpd capacity, 19,000bpd capacity ISO-Dewaxing complex and hydrogen manufacturing sulphur recovery complex. It also includes providing substations, as well as cooling towers at the refinery. The project is expected to be completed by 2016.