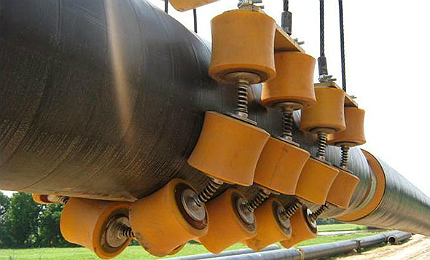 The 416-mile (670km) long Mangala Development Pipeline (MDP) is a crude oil pipeline that runs from Barmer, Rajasthan, to the Jamnagar district of Gujarat, India. It is longest continuously heated pipeline in the world and the first such pipeline in India.

"The 24in pipeline has a capacity of 175,000bopd. It is part of Cairn India’s Mangala oil field development plan."

The 24in pipeline has a capacity of 175,000bopd. It is part of Cairn India’s Mangala oil field development plan.

The MDP is operated by Cairn India with 70% ownership in the project. The remaining 30% is owned by the Oil and Natural Gas Corporation (ONGC).

The project is being built in two phases. The 367-mile (590km) first phase was commissioned for commercial operation in June 2010. Construction of the remaining 49-mile (78.8km) section as part of the second phase began in the third quarter of 2012.

This section of the project has been delayed by about 12 months due to execution challenges, mainly political in nature. The pipeline is expected to be completed in 2013.

Cairn is planning to carry out de-bottlenecking of the pipeline in the future to increase capacity by ten percent. These plans are subject to regulatory approval and will involve implementation of new technologies.

The pipeline starts from the Mangala Processing Terminal (MPT) in Barmer and terminates at Bhogat, near Jamnagar. Approximately 321 miles (516km) of the pipeline falls in Gujarat, while the rest is in Rajasthan.

Originating at the MPT, the pipeline travels 202 miles (325km) southwards and terminates at Viramgam, near Ahmedabad. From there, the pipeline runs 165 miles (265km) south-west and ends at an oil export terminal at Salaya in Jamnagar.

The remaining 49-mile (78.8km) section currently under construction will extend the pipeline from Salaya to the Bhogat terminal located on the Arabian Sea coast in Gujarat.

Construction details of the Indian pipeline

The project was approved by the Indian Government in December 2007. Construction on the project’s first phase was formally launched in June 2008 under an engineering, procurement and construction (EPC) contract. The pipeline and related infrastructure were completed in a short period of two years.

The first phase of the pipeline traverses more than 270 villages and has more than 700 crossings, including 34 major rivers and 38 canals. The construction activity required the engagement of more than 6,000 people.

The pipeline is equipped with a skin effect heat management system (SEHMS). This innovative system prevents the crude oil from turning into wax by ensuring that temperature inside the pipeline always remains higher than the wax appearance temperature (WAT) of 149°F.

"The pipeline starts from the Mangala Processing Terminal (MPT) in Barmer and terminates at Bhogat, near Jamnagar."

A heat tube supplies the heat required to maintain the correct temperature of the oil. It is welded to the side of the main line.

An 8in gas pipeline runs parallel to the main line. It is used to supply gas to the all the three dozen ground installations located at every 11.2-mile (18km) of distance along the pipeline. These installations ensure that the right temperature of pipeline is maintained.

The MDP is also insulated with 3.5in poly urethane foam (PUF) to prevent heat loss to the soil. Furthermore, the pipeline is wrapped with a high-density polyethylene (HDPE) jacket to make it water tight.

Three pigging stations are also provided for cleaning and inspection purposes. The three stations are located at the Viramgam terminal, Sanchore and Wankaner.

The EPC contract to build the first phase of the MDP project was awarded to Larsen & Toubro (L&T) in February 2008. Engineering services for the project were provided by L&T Gulf, a joint venture of L&T and Gulf Interstate.

Detailed engineering design for the six kilometre-long offshore pipeline was undertaken by Intecsea. The routes of the pipeline and preliminary hydraulics for the project were developed by J P Kenny, a subsidiary of Wood Group.

In April 2011, QinetiQ was contracted to supply its OptaSense security system for the MDP project. The system will be used along the complete length of the pipeline.

Mangalore Refinery and Petrochemicals Limited (MRPL) is located in the city of Mangalore about 350km from Bangalore in the state of Karnataka, India.

The Hazira liquefied natural gas (LNG) terminal is located in the Surat district of Gujarat, India.