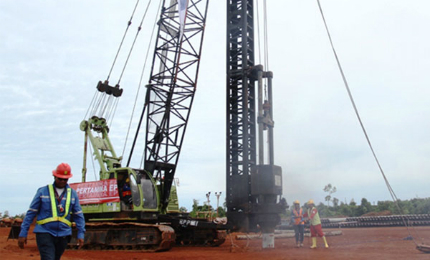 The Matindok gas development project comprises the development of the Donggi, Matindok, Maleoraja, Sukamaju and Minahaki fields, which are located in the Banggai basin in Central Sulawesi, Indonesia. First production from the project was in early 2016.

Other project activities included the construction of block stations at Donggi, Sukamaju and Matindok, manifolding stations at Maleoraja and Minahaki, export pipelines connecting the Donggi-Senoro LNG plant, and the development of new roads and improvement of existing roads to facilitate drilling activities.

The gas fuel required for the project facilities is sourced from the project site itself, while the required oil fuel is supplied from one of Pertamina’s refinery.

The $234m engineering, procurement, construction and installation (EPCI) contract for the gas well pads, flowlines, pipelines, the central processing plant at Matindok with gas treatment facilities such as acid gas removal and sulphur removal, and ancillary infrastructure was awarded to the joint venture of Technip and Wijaya Karya (WIKA).

In June 2015, Integraph and its local distributor and partner PT Everest Technology were contracted to provide the former’s proprietary SmartPlant Foundation and SmartPlant Enterprise for Owner Operators (SPO) Core solutions to power a new electronic document management system (EDMS) for the project.

Gas treatment technologies were provided by Shell, while forged fittings and branch outlets for the project were supplied by Delcorte Fittings.