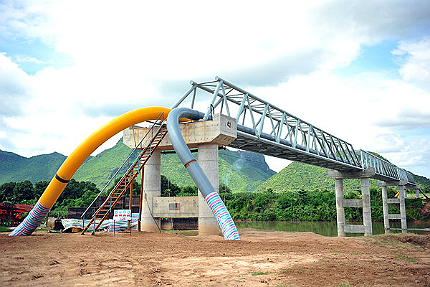 The Myanmar-China Pipelines project comprises of the construction of two separate, parallel pipelines for transporting crude oil and natural gas from Daewoo International’s offshore blocks A-1 and A-3 in Myanmar, to China.

The project was first proposed in 2004 and took a leap when China National Petroleum Corporation (CNPC) signed a 30-year hydrocarbons purchase and sale agreement with Daewoo International in December 2008.

The pipelines will enable CNPC to import natural gas to China, while also helping Myanmar to supply gas locally.

CNPC’s subsidiary, Southeast Asia Crude Pipeline Company, was assigned with the task of designing, constructing, operating and maintaining the crude and gas pipelines in 2009.

Construction on the Myanmar section of the pipelines began in June 2010, while that on the Chinese section started about three months later.

The gas pipeline became fully operational in October 2013. The crude pipeline is expected to be completed by the end of 2013.

The estimated investment on the project is $2.54bn, including $1.5bn for the oil pipeline and $1.04bn for the gas pipeline.

CNPC (50.9%) and Myanmar Oil and Gas Enterprise (MOGE, 49.1%) are investing in the crude oil pipeline, where as CNPC, MOGE, Daewoo International, KOGAS, Indian Oil and GAIL invested in the natural gas pipeline.

The pipelines will reduce China’s energy import costs and diversify its import routes.

CNPC currently ships crude oil to China through the Strait of Malacca, which is controlled by the US.

The Myanmar-China crude pipeline will reduce the reliance on the conventional shipping route and thus secure China’s energy security.

Route for the crude oil and natural gas pipelines

The gas pipeline is 2,520km long including the 793km Myanmar section and the 1,727km China section.

“The estimated investment on the project is $2.54bn, including $1.5bn for the oil pipeline and $1.04bn for the gas pipeline.”

The pipelines run through the state of Rakhine, Magway, Mandalay and state of Shan, before entering the Ruli region in the Yunnan province of China.

The gas pipeline runs through Guizhou, Chongqing and Guangxi. The pipelines end at Kunming, the capital city of Yunnan province.

The crude pipeline will carry the crude oil that CNPC imports from Africa and the Middle East into China, via Myanmar.

The natural gas pipeline has a capacity to transport up to 13 billion cubic metres of gas per year. It reduces the coal consumption by 30.72 million tonnes and CO2 emissions by 52.83 million tonnes.

The crude oil pipeline is designed to carry approximately 22 million tonnes of oil per annum.

The design capacity of the natural gas pipeline is 13 billion cubic metres. It is expected to deliver 12 billion m³ of gas to China every year, while reserving one billion m³ of gas for Myanmar’s domestic use.

The gas pipeline from Myanmar to China carries the gas extracted from Shwe gas project located offshore of the Bay of Bengal. The Shwe gas project is owned by a joint venture between Daewoo International, ONGC Videsh, MOGE, GAIL and Korea Gas Corp.

The associated infrastructure built for the Myanmar-China pipelines includes a 300,000t crude oil wharf in Beijing and a 650,000m³ reservoir at Maday Island for storage of water. The reservoir is the main source of water for the pipeline operation.

The scope of the contract includes provision of engineering inspection to the Guangxi section of the pipeline.

Schneider Electric was awarded a contract in May 2013 to provide an engineering station control system for monitoring and managing the pipeline operations.

As part of the contract Schneider Electric will supply its OASyS enterprise control and monitoring system.

Shengli Oil & Gas Pipe Holdings is the supplier of pipes for the pipeline.

The 3,666km long Central Asia-China gas pipeline begins at Gedaim, on the Turkmenistan / Uzbekistan border, and ends at Horgos, in the Xinjiang region of China.

Changbei Tight Gas Project includes the development of the Changbei onshore gas field located in the province of Shaanxi in China.