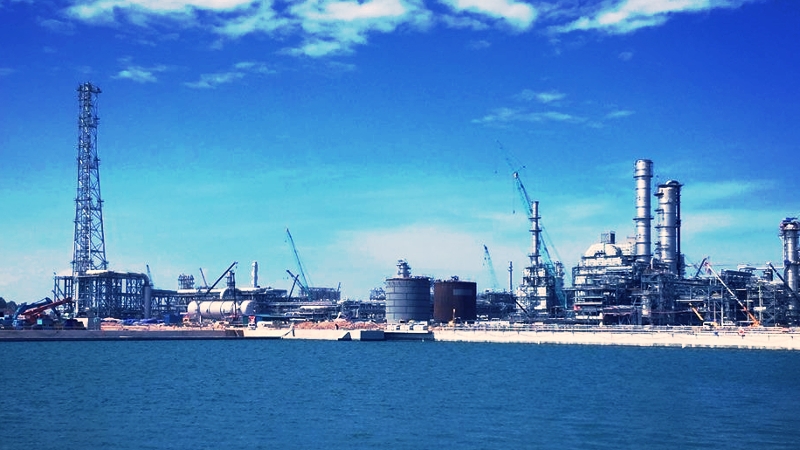 It is the second refinery to be developed in the country, after the Dung Quat refinery.

The Nghi Son project aims to improve energy security in Vietnam and help meet the growing demand for refined and petrochemical products due to the country’s rapid industrialisation and modernisation.

Nghi Son refinery will cost an estimated $9bn and is being developed by a joint venture (JV) between four companies, including Vietnam Oil and Gas Group (PetroVietnam, 25%), Kuwait Petroleum Europe (KPE, 35.1%), Idemitsu Kosan (35.1%) and Mitsui Chemical (4.8%).

The JV formed an organisation named Nghi Son Refinery and Petrochemical Limited Liability Company in order to develop the project.

Construction of the refinery complex commenced in October 2013 and mechanical completion was achieved in April 2017.

The refinery is expected to begin commercial operations by the end of 2017.

Site and location details of the Vietnamese refinery

The refinery will occupy an area of 325ha, which required the resettlement of 1,500 people from 350 households.

Offsite facilities at the refinery include eight tank systems for feedstock, featuring a capacity of 120,000m3 each.

The storage facilities will provide capacity for roughly ten days of operation. Intermediate and final product storage, as well as facilities for import and export of feed and products, are also set for inclusion at the refinery.

Other facilities at the site include control and electrical systems, and effluent treatment, firewater and flare systems.

Power for the refinery’s operations will be produced by gas and steam turbine generators. The refinery will also include utilities for cooling water, power, steam, and plant air.

A 48in-diameter and 35km-long crude oil pipeline will run between the SPM and the tank storage facilities for the import and export of products.

The pipeline will be offshore for 33.5km, while the remaining 1.5 km will be located on-shore.

The Nghi Son refinery will process and refine 200,000 barrels of crude oil a day to produce 2,204kt of premium diesel annually, as well as 1,470kt of regular diesel and 1,153kt of gasoline.

LPG, jet fuel and various other petrochemical products will also be produced at the facility.

Japan Bank for International Cooperation and the Export-Import Bank of Korea are providing $2.3bn funding for the project.

“The Nghi Son refinery will process and refine 200,000 barrels of crude oil a day to produce 2,204kt of premium diesel annually.”

Another $2.7bn is being provided by domestic and overseas banks, including the Bank of Tokyo-Mitsubishi UFJ, Sumitomo Mitsui Banking Corporation, Sumitomo Mitsui Trust Bank, and Mizuho Corporate Bank.

Contractors involved with the refinery and petrochemical project

Toyo Construction was awarded the EPC contract for the refinery’s offshore facilities.

The Enersul Limited Partnership of Calgary were responsible for the facility’s sulphur granulation units, and Doosan Heavy Industries supplied the pressure vessels, towers and heat exchangers.