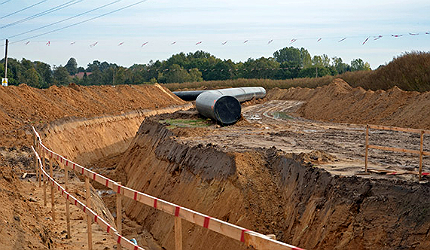 "The $1bn natural gas pipeline is owned and operated by NEL Gastransport and was built by OPAL NEL Transport."

Construction works on the natural gas pipeline commenced in the spring of 2011 after receiving planning approvals in February 2011. The pipeline became operational in November 2012.

A 40km section of the pipeline passing through the southern part of Hamburg, between Sülstorf and Achim, is still in the permitting process as re-routing is to be done. The stretch is expected to come online in 2013. It is currently being substituted by an existing pipeline near Bremen.

The $1bn natural gas pipeline is owned and operated by NEL Gastransport and was built by OPAL NEL Transport.

The operating partners of the pipeline include W&G Beteiligungs (51%), which is a partnership of Wingas and Gazprom, E.ON Ruhrgas (ten percent), Gasunie (20%) and Fluxys (19%).

Integrating the NEL with the NSGP

NEL is the second pipeline integrated into the NSGP. The first pipeline is the Baltic Sea Pipeline Link (OPAL), which came online in June 2011. The two pipelines together have a capacity of 55 billion cubic metres (bcm) a year, capable of serving 22 million households in Lumbin alone. The two pipelines primarily act as a link between various gas reserves located in Siberia and the West European gas supply network.

NEL connects with the NSGP at its onshore section in Lubmin and stretches westwards to Rehden, where it connects with the Rehden-Hamburg gas pipeline. It further connects with MIDAL Pipeline to form the Greifswald-Bunde connection. The natural gas from NSGP is supplied to the European Transmission System.

The NEL pipeline covers 200km in the Lower Saxony region and 240km across Mecklenburg-Western Pomerania.

It will be capable of transferring 20bcm of natural gas per annum to Germany and its neighbouring countries.

Construction of the German pipeline

Each pipe utilised for the project measures 56in in diameter and is 18m long, and weighs 15t. Construction activities for the pipeline involved welding of the segments and excavation of the pipe trenches. Rigorous examination of the welded seams was carried out before the pipes underwent a hydrostatic test to bear the pressure during operations. The project made use of around 24,000 pipes in total.

"NEL is the second pipeline integrated into the NSGP. The first pipeline is the Baltic Sea Pipeline Link (OPAL)."

The outer part of the pipes is coated with polyethylene and anti-corrosion materials. The project also comprised of constructing the line valve stations located within a distance of every 15km to 18km along the whole stretch of the pipeline.

Trucks with wide tyres were used for transportation of various equipments to the project site to avoid soil compaction.

The constructors implemented the horizontal directional drilling method (HDD) for locations where there was presence of water. The HDD follows a trench free installation procedure, thus cutting down on the construction time.

An underground drill channel measuring 1,800m in length and 1.8m in diameter was constructed at the point where the pipeline crosses the Elbe River. A 1.4m diameter pipeline string weighing 900t was then used to lay the pipeline into the drill channel.

Contractors involved with the European pipeline

A portion of the pipeline in Lower Saxony measuring 62km in length was constructed by Nacap. Another portion in Lower Saxony measuring the same length was constructed by ARGE NEL Niedersachsen, a consortium of Friedrich Vorwerk Company, PPS Pipeline System and Anton Meyer Company. Friedrich Vorwerk was also responsible for constructing two line valve stations Marienthal and Buchholz. Nacap and ARGE NEL Niedersachsen further contracted local companies to assist in the construction of the pipeline.

South Caucasus Pipeline (SCP) is a gas exportation pipeline that transmits natural gas from the Shah Deniz field located in the Azeri Caspian Sea to Azerbaijan, Georgia and Turkey for distribution.