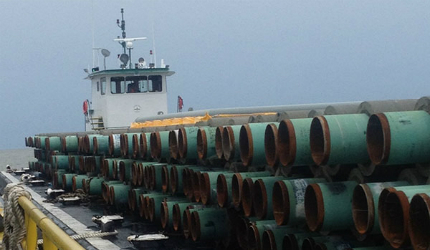 Parkway Pipeline is a 227km underground petroleum product pipeline being constructed in the United States with an estimated cost of $250m.

The pipeline, which measures 16in (406mm) in diameter, extends from Norco, Louisiana, to Collins, Mississippi. Construction was started in August 2012 and the pipeline was put into service in September 2013.

The project was undertaken by Parkway Pipeline, a joint venture between Kinder Morgan Energy Partners (KMEP) and Valero Energy. Kinder Morgan was responsible for managing the construction and operating the pipeline.

KMEP is a subsidiary of Kinder Morgan and a major pipeline transportation and energy storage firm. It is headquartered in Houston, Texas. Valero Energy is headquartered in San Antonio, Texas. It is the largest independent petroleum refiner and seller in the world.

Purpose and capacity of Parkway Pipeline

The Parkway Pipeline was built for the exportation of refined liquid petroleum products such as gasoline, jet fuel, diesel fuel and turbine fuel from refineries in Norco to facilities in Collins.

"As per Kinder Morgan’s estimates, the two states earn approximately $6m per annum in the form of property and sales tax revenues."

The transported products are sold locally. They can be further transported to major petroleum markets located in the south-eastern region of the US, via other existing pipeline systems.

The project is seen as a significant enhancement to the country’s pipeline infrastructure to help cope with the nation’s growing demands for energy.

The pipeline system has an initial capacity of 110,000 barrels per day (bpd) with the ability to expand to more than 200,000bpd.

The estimated cost of constructing the pipeline section in Mississippi was $60m. The Louisiana section cost approximately $140m.

According to Kinder Morgan’s estimates, the two states earn approximately $6m per annum in the form of property and sales tax revenues through the project. Louisiana’s share is about $3.3m, while Mississippi benefits roughly $2.5m each year.

The project also provides financial opportunities for the local businesses as it created more than 1,200 construction jobs during the peak construction period.

Route of the Parkway petroleum pipeline

"The pipeline originates from the Valero-operated St. Charles Refinery in Norco. It moves northward and terminate at Collins."

The pipeline originates from the Valero operated St. Charles Refinery in Norco. It moves northward and terminates at Collins, where it is fastened to the Plantation Pipe Line (PPL), a petroleum transportation hub operated by Kinder Morgan.

St. Charles Refinery, located on approximately 1,000 acres of area, was originally built in 1980s. Its total processing capacity is roughly 31,684m3 a day. It produces a wide range of petroleum products such as gasoline, kerosene, diesel fuel and liquefied petroleum gases (LPGs).

In Louisiana, the pipeline passes through the parishes of St. Charles, Jefferson, St. Tammany and Washington. It crosses 28 miles of environmentally sensitive Lake Pontchartrain in Louisiana. In Mississippi, it traverses the counties of Walthall, Marion, Jefferson Davis and Covington.

Construction and operation of the US pipeline

The Parkway pipeline was built in three phases. Most important among them was the Lake Pontchartrain section.

"The pipeline is installed and operated as per the standards of the US Department of Transportation (USDOT)."

Workers were deployed on barges to weld the 406mm pipe. Once welded, the pipeline was placed in a specially built trench created by a jetting process. The pipeline was installed about 1.2m below the surface of the lake. North and south sections from the lake form the two other phases.

The pipeline is operated as per the standards of the US Department of Transportation (USDOT), Pipeline and Hazardous Materials Safety Administration (PHMSA). Advanced equipment is used to monitor the pipeline, in addition to regular visual inspections.

Contracts awarded by KMEP and Valero

Liberty Pipeline Services was awarded a contract to provide safety inspection services for the project. Resource Environmental Solutions was contracted to provide wetland mitigation solution for the pipeline. The solution enabled the project to comply with the requirements under section 404 of the Clean Water Act.

LouTex contractors were responsible for laying the pipeline in the 105-mile long section extending from the north shore of Lake Pontchartrain to Collins. LouTex subcontracted H&E Equipment Services to supply the equipment.

As crude oil prices rise, the price of natural gas follows and gas resources start to become more economically viable. In Alaska, crude oil production from Prudhoe Bay is now in decline so gas could take over.

The Keystone Pipeline is a new export pipeline project instigated by TransCanada and ConocoPhillips. When the $12bn pipeline is complete it will traverse a distance of 3,461km (2,151 miles) and transport oil sands crude oil from Hardisty in Alberta to the US Midwest markets at Wood River and Patoka, Illinois, and via a branch of the pipeline to Cushing, Oklahoma, US.