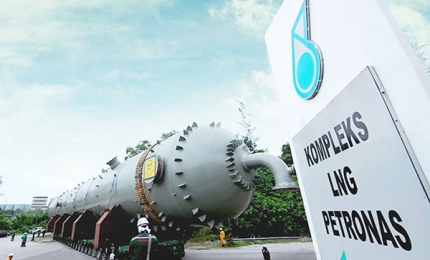 The complex is supplied with gas from gas fields in the Central Luconia area, which are located 125km to 275km offshore Bintulu, Sarawak. LNG from the complex is exported by vessels primarily to customers in Japan and China, and few more countries in the Asia Pacific. The shipping activities are overseen by MISC, a subsidiary of Petronas.

“The complex is supplied with gas from gas fields in the Central Luconia area, which are located 125km to 275km offshore Bintulu, Sarawak.”

Subsidiary Petronas LNG Train 9 was created in January 2012 to add the ninth LNG train to the complex and revamp the existing Trains 4, 5 and 6. The 3.6 million tonnes per annum (mtpa) LNG Train 9 will increase the complex’s production capacity from 25.7mtpa to 29.3mtpa. It is scheduled for completion in late 2015.

The first train at the complex came online in August 1982 and the first cargo from the complex was exported to Japan in January 1983. Two more trains were commissioned in the first plant by 1984. Each train has a production capacity of 2mtpa.

The project will involve the construction and installation of gas receiving facilities, an acid gas removal unit, a dehydration and mercury removal unit, a fractionation and liquefaction unit, an LNG rundown unit, and associated utilities and facilities.

The project will require an additional supply of approximately 850 million standard cubic feet per day (mmscfd) of feed gas from fields offshore Sarawak. It will benefit by using the existing storage and loading facilities within the complex.

The front end engineering design (FEED) studies and early works for the new LNG unit were completed in December 2012, under a dual FEED scheme, by JGC Corporation and the joint venture (JV) of Chiyoda Corporation and Saipem. JGC was awarded the $2bn engineering, procurement, construction and commissioning (EPCC) contract in March 2013 based on the results of the FEED studies.

Other contractors involved with the LNG Train 9

Ebara International was contracted in April 2013 to supply 12 cryogenic pumps and expanders for the project.

Contractual, commercial and quantity surveying services are being provided by Cannonway Energy. An absorber facility weighing 1,480t was transported from the Malaysian Bintulu port to the project site by Scheuerle.

The structural steel works and civil defence shelter doors for the project are being supplied by TTJ Holdings, while the steel structure erection works are being performed by Muhibbah Engineering.

The latest major activity at the complex prior to the implementation of the Petronas LNG Train 9 Project involved the installation of the 1,840t/d capacity new boil-off gas (BOG) re-liquefaction facility to reliquefy the excessive BOG evaporating out of the LNG storage tanks.