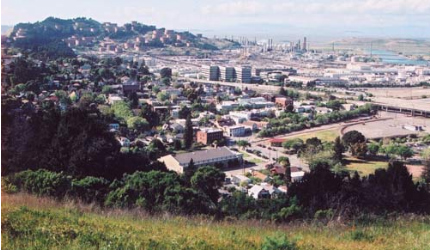 The Chevron Richmond refinery is situated 25 miles from San Francisco on 2,900 acres of land. It produces high-quality transportation fuels mainly for the San Francisco Bay area and Northwest US. The Chevron refinery began operations in 1902 under the ownership of Pacific Coast Oil.

The project processes over 240,000 barrels of crude oil a day. The product portfolio of Richmond refinery consists of motor gasoline, jet fuel, diesel fuel and lubricants. The range of lubricating oil produced is distributed throughout the western US.

The Chevron Richmond Refinery is one among the largest producers of base oils. Base oil is the main component of lubricant blends on the west coast. The lube oil facility that converts heavy gas oil from crude unit into various grades of lubricating oil is an advantage the Richmond refinery has over other refineries.

Chevron announced in July 2009 that it is stopping work on a refinery upgrade and modernisation project, which was drafted to replace old equipment with newer technology.

The decision was taken after the Contra Cost County Superior Court ruled in favour of a petition filed by the Communities for Better Environment, the West Country Toxics Coalition and the Asian Pacific Environmental Network. The petitioners have contended that the upgrade will enable Chevron to process heavier crude oil through the refinery and will result in more pollution in the surrounding areas.

Nearly 1,000 construction workers were left jobless with this announcement. The company has appealed against the ruling. As of September 2012, Chevron is awaiting ruling from the city court.

"The lube oil facility that converts heavy gas oil from crude unit into various grades of lubricating oil is an advantage the Richmond refinery has over other refineries."

Work on the Richmond refinery renewal project began in October 2008. The renewal project was taken up to improve reliability and energy efficiency of the refinery. The estimated cost of the project is around $1bn.

The project includes replacement of hydrogen plant, power plant and reformer tanks, and installation of new equipment to enhance the refinery’s ability to produce gasoline that meets California specifications. The renewal was also taken up to use a broad range of crude oil sources.

The planning commission opened the public hearing in March 2008 for the proposal to replace the existing hydrogen plant, power plant and reformer tanks and to install new equipments. In June 2008, the commission certified the final Environmental Impact Report (EIR).

Hydrogen Tie-in, Hydrogen Purity and Continuous Catalyst Reformer are the different components of the Energy and Hydrogen Renewal Project.

The new hydrogen plant was supposed to replace the refinery’s old plant. It was planned to lay a 50,000ft pipe to connect the new plant with the refinery. The work was expected to start in second quarter of 2009. The hydrogen compressor upgrade project would improve the refinery’s compressor. The refinery’s flexibility would increase with the Hydrogen Purity project, with the new facility processing a wide range of crude.

The Continuous Catalyst Reformer, the newly permitted component of the renewal project, was expected to be delayed due to high construction cost, combination factors and tight economic conditions.

The refining process starts with fractional distillation, which separates the components of crude oil. The gas oil is then converted into fuels and treated and blended to remove impurities.

"Around 1,022,000 barrels of oil products have been recovered from refinery process as saleable products."

During the process of refining, 40% of crude oil contains ingredients for high quality fuels, while the rest is heavy and of poor in quality. This requires further treatment.

The plant completed the first of its two co-generation projects to generate electricity and process steam, which helped in reducing operating costs in 1992. It introduced Isodewaxing technology for maximising the production of base oils with enhanced qualities.

Chevron says that it uses various techniques to reduce or recycle waste and transform it. Laser toner cartridges, used batteries, light bulbs, aerosol cans and newspapers are recycled at the refinery.

The present diversion rate is 50%. Around 1,022,000 barrels of oil products have been recovered from refinery process as saleable products.

Gas produced as a by-product of the refinery process is treated to remove 99.96% of its hydrogen sulphide and used as fuel gas, which resulted in replacement of purchase equal to 30 billion standard cubic feet of natural gas. Around 20% of solid waste such as wood and cardboard is also recycled at the refinery.

The Chevron Pascagoula Refinery is one of the top ten refineries in the US, located in the city of Pascagoula, Mississippi.

In August 2012, a fire broke out at the Crude Distillation Unit No. 4 of the refinery. The fire damaged the distillation unit and the adjacent cooling water tower (No. 3). The two installations were subsequently taken out of service. These units are expected to be repaired and brought back into service in the first quarter of 2013.