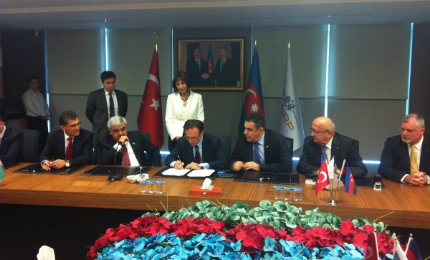 Trans Anatolian Natural Gas Pipeline Project (TANAP) involves the construction of a 1,850km-long pipeline to supply gas from Azerbaijan, which currently has gas reserves of more than three trillion cubic metres, to Turkey and Europe. The pipeline construction was started in March 2015.

Southern Gas Corridor Closed Joint Stock Company (SGC – 58%), BOTAS (30%) and BP (12%) are the partners in the project development. SGC is 51% state-owned and 49% owned by SOCAR. The shareholders agreement for TANAP was signed in March 2015, a few days prior to the start of the pipeline construction.

The overall investment on the project is estimated to reach $11.7bn and is expected to bring more than 15,000 jobs. It will be one of the world’s longest gas pipelines upon completion.

West-East Gas Pipeline Project (WEPP) is one of the major natural gas transmission projects intended for the development of the western regions in China.

The project idea was first proposed at the 3rd Black Sea Energy and Economic Forum organised in Istanbul in November 2011. A memorandum of understanding (MoU) for the pipeline development was signed between the governments of Turkey and Azerbaijan in December 2011 and, in June 2012.

This agreement concerned the construction of the pipeline that was agreed upon by the two countries.

The gas supply to Turkey is scheduled to start in 2018. The pipeline will connect with the expanded South Caucasus Pipeline (SCP) and be linked to the Trans Adriatic Natural Gas Pipeline (TAP), to supply gas to Europe via Greece, Albania, and Italy by early 2020. The three pipelines together will form the Southern Gas Corridor.

The new pipeline will stretch from the Turkish village of Türkgözü in the Posof district of Ardahan province and culminate at the Ipsala district of Edirne province along the Turkish-Greek border, where it will be linked to the TAP. The pipeline will traverse 20 provinces, 67 districts and 600 villages and will run for 19km below the Sea of Marmara.

The first phase of TANAP stretches 1,334km from the Turkish-Georgian border to Eskishehir Province. It is being constructed in three lots. The pipeline on this stretch will measure 56in in diameter, whereas the remaining stretches will feature 48in diameter pipes.

"The overall investment on the project is estimated to reach $11.7bn and is expected to bring more than 15,000 jobs."

Lot 1 will stretch 375km from Türkgözü village in the Posof district of Ardahan province to Aşkale district in the Erzurum Province, while LOT 2 will stretch 450km passing through the Turkish cities of Sivas, Erzincan, Gümüşhane and Bayburt, and Lot 3 will stretch 509km.

Early works for Lots 1 and 2, which involved the construction of four turn-key camps and associated infrastructure from Kars to Sivas, were completed by Treysan.

The pipeline will be at an elevation of 3,000m above sea level at its highest point. The initial phase of the project also involves the construction of seven compressor stations, four metering stations, 50 block valve stations, and 11 pigging stations.

Contractors involved with the TANAP

WorleyParsons is the engineering, procurement and construction management (EPCM) contractor for the project. Design and consulting services for the project are being provided by ILF Consulting Engineers.

About one-third of the pipes for the project are being supplied by the Mannesmann-Noksel-Erciyas consortium comprising Borusan Mannesmann, Noksel Çelik and Erciyas Çelik. The other pipe suppliers include the Umran-Emek consortium, Toscelik Profil ve Sac Endustrisi, and Baosteel Europe, a Chinese company.