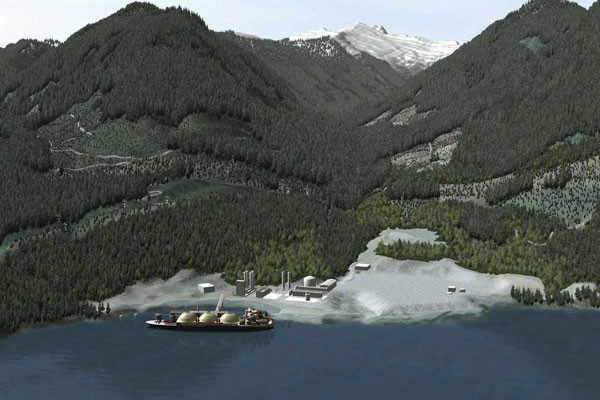 The Woodfibre LNG Project is a liquefied natural gas (LNG) processing and export facility proposed to be developed by Woodfibre Natural Gas, a Pacific Oil & Gas Company. The facility will be located around 7km south-west of Squamish, British Columbia, Canada, near the north-western shoreline of Howe Sound.

Construction of the plant is anticipated to start in 2016 and first gas is expected by 2018. The facility will operate for 25 years and have an annual processing and exporting capacity between 1.5 million tonnes (Mt) to and 2.1Mt of LNG. The project is expected to create approximately 600 jobs during construction and 100 permanent jobs when operational.

The National Energy Board (NEB) approved the LNG export license for the project in December 2013 for the application submitted in July 2013.

Woodfibre Natural Gas signed a purchase sales agreement (PSA) with Western Forest Products (WFP) to acquire the site for the LNG processing and export facility in 2013. According to the agreement, WFP will clean the site and perform remediation activities in order to acquire a certificate of compliance (CoC) from the British Columbian ministry of environment.

Pacific Energy Corporation (PEC) is discussing with the Spectra Energy Transmission (Spectra) to use the latter’s existing pipeline systems for the transportation of the natural gas. Spectra is a joint venture of FortisBC Energy (FEVI) and Westcoast Energy (Westcoast).

The project will be developed in a single phase. Two possible configurations are being considered for residing the gas pre-treatment and LNG processing facilities of the project.

“The natural gas produced from the LNG facility will be exported via the FortisBC pipeline.”

The project is expected to annually use 40 LNG carriers, which will be equipped with advanced radar systems, leak detection and emergency shutdown technology. Other support infrastructure will include single marine mooring facilities, materials offloading facility and other temporary facilities such as electrical substations, site administration, and chemical-fuelling-storage facilities.

A helipad will also be constructed. Other utility facilities will be drinking water, sewer and wastewater systems.

The natural gas produced from the LNG facility will be exported via the FortisBC pipeline. The gas will be liquefied and loaded into LNG carriers for further transportation.

The LNG will be stored in floating storage units (FSU). The feed gas will be supplied by the Eagle Mountain-Woodfibre gas pipeline.

KBR was contracted to carry out the front-end engineering and design (FEED) services for the project, in March 2016.

Guangzhou Gas entered into an off-take agreement with Woodfibre for 1mtpa of LNG for a period of 25 years starting from 2020.

Linde Group is responsible for providing engineering and procurement services for the project.