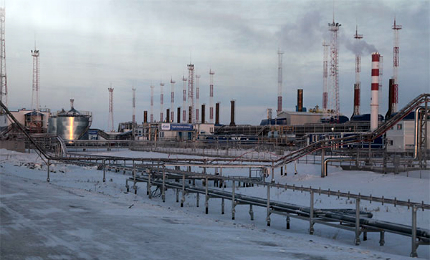 The Zapolyarnoye oil, gas and condensate field is located 220km away from Novy Urengoy, in the southern Taz District of Yamal-Nenets Autonomous Area, Russia. Commercial production from the field began in 2001. Zapolyarnoye is owned and operated by the Russian state-owned energy giant Gazprom.

Zapolyarnoye has now become the most productive field in Russia with the commissioning of its fifth comprehensive gas treatment unit (CGTU) and the third compressor workshop at the Zapolyarnaya main compressor station (MCS) at the beginning of 2013.

The gas field has been brought to its full design capacity of 130 billion m3 of gas per year. The field reached the trillion cubic metres production mark in December 2012.

"Zapolyarnoye is owned and operated by the Russian state-owned energy giant Gazprom."

The Zapolyarnoye field is relatively compact in size. It is spread over an area of 8,745ha. The length and width of the field are 50km and 30km respectively.

Gas produced from the field is transported to the market through the 190km Zapolyarnoye – Urengoy gas trunkline system (GTS). The GTS comprises of four pipelines, each with a diameter of 1.4m and eight compressor workshops (three at the Zapolyarnaya MCS, four at the Purtazovskaya CS and one at the Novo-Urengoyskaya MCS).

The Zapolyarnoye field, which forms a part of the Western Siberia oil and gas bearing province, was discovered in 1965. An agreement was signed between the Taz District Administration and Gazprom Dobycha Yamburg, a wholly owned subsidiary of Gazprom, in 1992 to develop the field for commercial production.

The installed capacity of the Zapolyarnoye field reached 100 billion m³ per year by 2004, with the commissioning of the third CGTU for Cenomanian deposits (CGTU-3C) that has an annual capacity of 32.5 billion m³.

Gas and condensate production from the deeper Valanginian deposits of the Zapolyarnoye field started in April 2011 with the installation of CGTU 2-V. The CGTU 2-V, which has an annual capacity of 6.5 billion m³, was tied with 61 newly constructed production wells.

Production from the Cenomanian deposits was increased by 15 billion m³ with the construction of 42 additional wells in the middle of 2012.

Technology used at the Russian oil, gas and condensate field

Advanced technologies for extracting gas are employed in the Zapolyarnoye field. The field uses directional drilling with sub horizontal boreholes, a telemechanic system for online control of well operation and an advanced field development monitoring system.

The gas conditioning technology employed for the gas from the Cenomanian deposits is based on absorption method with diethylene glycol (DEG) used as absorbent. A low-temperature separation method is used, however, for Valanginian gas preparation.

Yuzhno-Russkoye onshore oil and gas condensate field is located about 2,175 miles (3,500km) north-east of Moscow, the capital city of Russia.

Saratov oil refinery is located in the city of Saratov, Russia. It was commissioned in April 1934 and can process 7mt of crude annually.