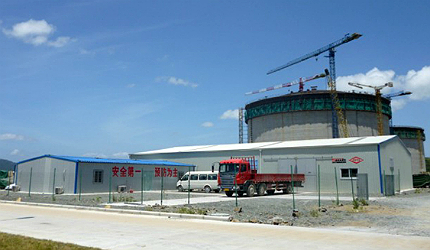 Zhejiang Ningbo liquefied natural gas (LNG) terminal is located in Beilun near the city of Ningbo in China’s Zhejiang Province. The terminal is being developed by the China National Offshore Oil Corporation (CNOOC – 51%), Zhejiang Energy Company (29%) and Ningbo Power (20%).

“Some of the other locations where China is building LNG terminals include Hainan, Tianjing, Fujian and Zhuhai.”

The terminal is being developed in two phases. The first phase with a receiving capacity of three million tonnes per annum was undertaken at a cost of RMB6.97bn ($1.11bn). It came on stream in September 2012, with the delivery of first LNG shipment by QatarGas LNG’s Zarga Q-Max LNG vessel.

The second phase, which will increase the terminal’s capacity to six million tonnes, is scheduled for completion in 2015. It will bring the total cost of the project to RMB28.6bn ($4.54bn).

The Zhejiang terminal is one of several terminals planned to be built by China on the east coast. China plans to decrease its dependence on coal and increase natural gas use.

It aims to increase the share of natural gas in its energy mix from 3.6% in 2007 to ten percent by 2020. To achieve this, CNOOC announced in 2007 its plans to increase its LNG imports to 60 million tonnes per annum (mtpa) in the next 15 years.

Some of the other locations where China is building LNG terminals include Hainan, Tianjing, Fujian and Zhuhai. Upon completion of the LNG terminals, China will have an import capacity of 41.9mtpa.

Being located in the prosperous Yangtze Delta area, the economy of Zhejiang is growing steadily. Nearly 90% of the energy consumed in Zhejiang comes from coal, which has had a major effect on the environment.

The LNG terminal project has been undertaken in order to ensure the long-term and sustained development of the region. The terminal will reduce the region’s dependence on coal and ensure a supply of clean energy.

The overall Zhejiang LNG project also includes the construction of a gas-fired power plant, which will supply clean electricity to the region.

The project was approved by the National Development and Reform Commission of China in December 2004. Construction of the terminal was started in December 2009.

The terminal includes a berth and three storage tanks with a capacity of 160,000m3 each. The berth is capable of docking the world’s largest LNG tankers, including QMax LNG vessels with capacities of between 80,000m3 to 266,000m3.

The storage tanks have a concrete outer tank and an inner tank made of nine percent nickel. The inner tank features a carbon steel liner on the inside which stops vapour from escaping. The inner diameter of the tanks is 82m and the concrete wall thickness is 0.70m. The tanks feature submerged pumps, safety valves, fire detection systems and other electrical equipment.

The storage tanks were completed and handed over in September 2012. The third tank B was tested in October 2012 after it was successfully loaded with LNG. Testing of the remaining two tanks, A and C, was completed in November 2012.

Distribution modes of re-gasified gas are yet to be finalised. Plans include feeding the gas into the Zhejiang Natural Gas Grid through a 38.7km pipeline or distribution by trucks to customers.

LNG will be supplied to the terminal by QatarGas as part of a 25-year agreement signed with Qatar in 2008. QatarGas will supply 2mtpa of LNG to all the terminals owned and operated by CNOOC.

Contractors involved with the LNG terminal

Chengda Engineering was awarded the engineering services contract for the project in May 2009.

The contractual scope included preliminary and detailed designs and site services for the terminal.

TGE Gas Engineering was responsible for design, construction, inspection and testing of the LNG storage tanks.

West-East Gas Pipeline Project (WEPP) is one of the major natural gas transmission projects intended for the development of the western regions in China.

China is developing into the world’s major economic power. To succeed in its drive to be the centre of manufacturing it has a strong thirst for power.

Jiangsu LNG Project is located on an artificial island in the Rudong County of China’s Jiangsu province. It includes a liquefied natural gas (LNG) receiving terminal and related infrastructure.