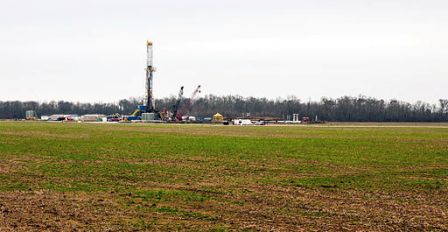 UK-based fracking company Cuadrilla Resources is expected to receive permission from the Environment Agency by the end of the week to drill an exploratory oil well near the village of Balcombe in Sussex.

The Gurdian reports that the company received a draft permit from the Environment Agency, following which drilling rigs started being moved into position.

The company’s spokesman told the news agency that it has carried out tests on the underground water aquifer around Balcombe, and drilling will not give rise to problems in the area.

Cuadrilla believes that micrite rock might produce oil without the involvement of fracking. Vertical drilling may be sufficient to capture the liquid.

Fracking involves a large amount of water being mixed with sand and chemicals which is injected at high pressure into thick shale rocks to open up tiny fissures that release bubbles of methane. These are trapped and collected at the surface through pipes.

Cuadrilla began fracking operations two years ago at sites in Lancashire, but stopped the activity due to two small earthquakes in the first wells.

Since, the company has applied for planning consent to undertake hydraulic fracturing and testing of the shale at its Grange Hill exploration well in Lancashire.

Cuadrilla is also planning to apply for consent to drill, hydraulically fracture and test the gas flow at six exploration wells in the Fylde area in Lancashire.

The UK is estimated to hold vast deposits of gas in key areas of northern England, according to the British Geological Survey.

Image: Cuadrilla plans to drill an exploratory oil well near the village of Balcombe in Sussex. Photo: courtesy of Daniel Foster.