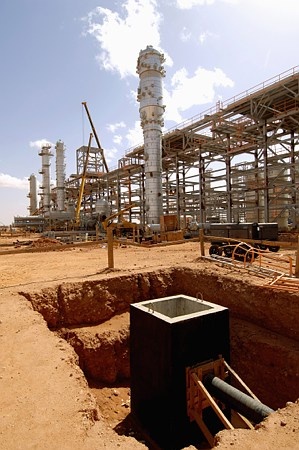 The hostage crisis in In Amenas gas field in Algeria has taken a bloody turn after Algerian military entered the complex and began an operation to free hundreds of hostages held by Islamist militants. In the process of the operation, both captors and hostages are said to have been killed.

A local source was quoted by Reuters as saying that about 11 militants were gunned down, while about 30 hostages also died in the operation.

Out of the hostages, two were identified as Japanese, two British, one French and eight Algerian. Nationalities of the others are as yet unknown.

Communication Minister Mohamed Said was quoted by APS news agency as expressing the Algerian government’s refusal to negotiate with hostage-takers, who are demanding to be allowed to take their captives abroad.

"We say that in the face of terrorism, yesterday as today as tomorrow, there will be no negotiation, no blackmail, no respite in the struggle against terrorism," added Said.

Algeria’s storm into the gas field invited criticism from western countries who were not informed beforehand of the operation.

This morning, UK Prime Minister David Cameron, who has cancelled a major policy speech to take stock of the situation, told parliment he had asked Algerian officials to consult him before mounting any operations, but added "that we [UK] will stand with the Algerians in their fight against these terrorist forces."

"We say that in the face of terrorism, yesterday as today as tomorrow, there will be no negotiation, no blackmail, no respite in the struggle against terrorism." – Algerian Communication Minister Mohamed Said.

Speaking of the safety of British nationals he said, "Last night the number of British citizens at risk was less than 30."

It has also been reported that around 22 foreign hostages remained unaccounted for on Friday, which includes fourteen Japanese nationals. Norway’s energy company Statoil said that eight Norwegian employees were still missing.

The Algerian operation is still ongoing but due to the remote location of the gas facility and sensitive nature of the operation, information is slow in reaching the governments of nationals affected.

In response to the attack, a senior Japanese government spokesman said that Prime Minister Shinzo Abe has cancelled part of his trip in South-East Asia and will fly home early due to the hostage crisis.

The terrorist attack was in response to France’s military intervention against Islamists in nearby Mali.

Operated by Statoil, BP and Sonatrach, the gas facility is located at Tigantourine, about 40km (25 miles) south-west of the town of In Amenas and 1,300km (800 miles) south-east of Algiers.