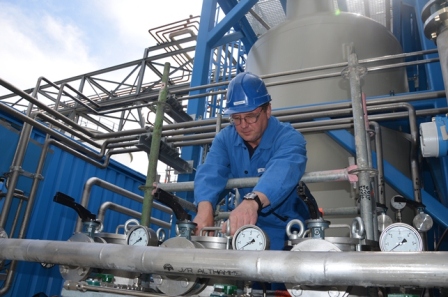 The new plant, which is expected to be operational in the autumn of 2014, will increase processing capacity of the enterprise to 240,000t of waste oil per year.

"The infrastructure, services and resources available permit an enterprise to focus on its core competencies, allowing companies such as Puralube Holding to work innovatively and to use their position as technological leaders to become market leaders as well," Haseloff added.

Pluralube, a German subsidiary of US-based Pluralube Group has deployed UOP-Hylube technology in its first refinery, which can produce about 80,000t of base oil per year.

The base oil can be used in different lubricant applications, such as machine oils, hydraulic oils or process oils, which can be used in tribological systems.

"The refinery units themselves are compactly arranged, so that the amount of space required for the plant is decreased significantly," Schüppel added.

Image: Puralube will construct the refining plant to produce base oils by using recycled waste oil. Photo: Courtesy of Saxony-Anhalt.