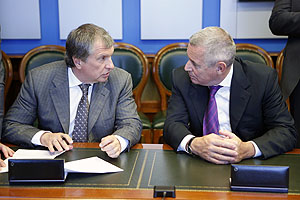 Rosneft, which already holds a 51% interest in Itera, is also planning to buy the remaining 49% in the gas firm, reported Reuters.

Rosneft and Itera have planned to produce 13bn cubic metres (bcm) of gas in 2013, equal to 2% of Russia’s total output, through a joint venture formed in 2012.

Rosneft, after buying Itera, has agreed to sell 4.65bn cubic metres of locally produced gas to the Surgutskaya GRES-2 power station, which is owned by E.ON, from 2013-2015.

In 2012, Rosneft picked up the controlling stake in Itera after Igor Sechin was appointed as the head of the country’s largest oil producer.

Sechin has also played a key role in closing the $55bn deal to buy Anglo-Russian oil firm TNK-BP in March 2013.

Rosneft CEO has also set a target of increasing the company’s gas production by 150% by the end of the decade.

The company has also joined with Novatek to lobby for the right to export liquefied natural gas (LNG) in an effort to challenge Gazprom’s goal of increasing exports of LNG to Asia.